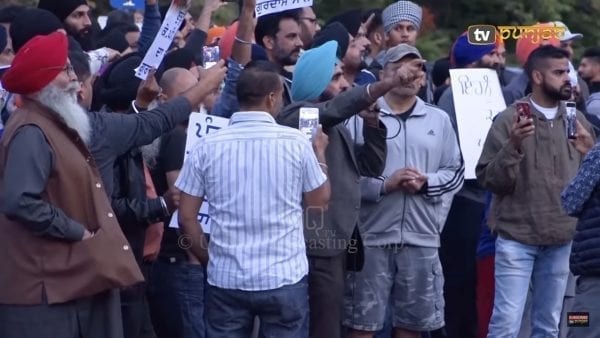 Interacting with media, Charanjit Singh Sujjon said that his conscience didn’t allow him to stay quiet against Gurdas Maan as he betrayed our mother tongue by favoring the ‘one nation, one language’ proposal of Indian Home Minister Amit Shah.

As the video of this protest gone viral over social media, it brought an immense trolling for Gurdas Maan’s response to this protesting guy.

It may be recalled here that Gurdas Maan had earlier said that the mother tongue should be respected and preferred, but being Indians there must be our one language.

While commenting on the uproar against the “one nation, one language” idea, Gurdas Mann had said that this uproar was being created on WhatsApp and social media by those who don’t have any other work. “Making negative comments against others has become common on social media. Those who are sincere in promoting their mother tongue and culture, continue their work their own way,” he had said.

In a talk show over radio, Gurdas Maan also said “Hindi is being talked about nowadays, Hindi must be there. I would say there must be Hindustani (language), a mixture of common words of Hindi, Urdu and Punjabi languages. But, the weaker thing should not be destroyed for the stronger one …This is necessary that one nation must have one language, so that one can get his words understood, even in south India. If you cannot do so, what is the use of being a Hindustani? France has own one language and its people speak it. Similarly, Germany has one language that the entire country speaks. And if our country speaks (one language), what is wrong with it? It should be spoken. If we are emphasizing the mother tongue so much, emphasis should also be laid on the ‘maasi’ (aunty or other languages).”