CHANDIGARH, Punjab—Taking serious view of the demolition of Bhagat Ravidas Ji temple in Delhi, the Sikh bodies SAD (Amritsar), Dal Khalsa and United Akali Dal  today resolved to take out a March in Jalandhar on Sep 3 to express their solidarity with Ravidasia community and to send message to Delhi government that nothing short of reconstruction of temple would soothe the hurt sentiments of aggrieved community. 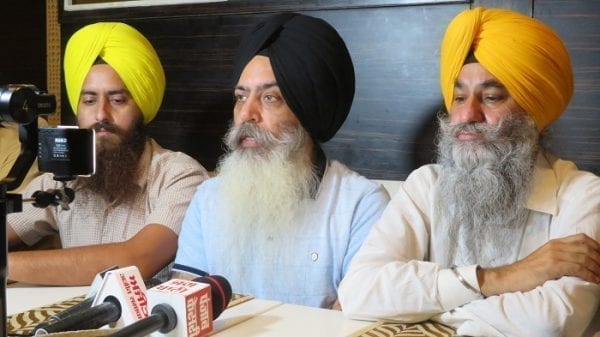 Addressing the media today, Kanwar Pal Singh and Prof Mohinder Pal Singh said demolition of temple was as painful and hurtful to Sikhs as it was to Ravidasia community. They said Bhagat Ravidas Ji’s hymns are part of Guru Granth Sahib Ji, hence both the communities have shared bonding.

“Moreover forceful demolition of any holy place irrespective of religion leaves lacks of its disciple and followers in pain and stress. We condemn the government’s move and fully stand by Ravidasia community in this hour of crisis,” they said.

They said their groups will cooperate with Ravidasia community in their future action program to build temple in case government fails to reconstruct the same at original location.

They further said before taking out the solidarity march in Jalandhar, they would hold convention at Gurdwara Guru Teg Bahadur where speakers will share their views and concerns on the matter. They have invited BSP and Bahujan Mukti Morcha representatives to attend the convention.

Replying to a question on CBI’s U-turn in Bargari sacrilege case, the Dal Khalsa leader said it was matter of grave concern that justice eludes Sikhs even after four years of painful event and despite three SIT’s constituted by both past and present governments.

“All probe panels (SIT) and the CBI were working on political lines thus making mockery of justice. Their findings contradict each other leaving us in no doubt that the factionalism within police hierarchy has marred their professionalism and credibility,” he added.