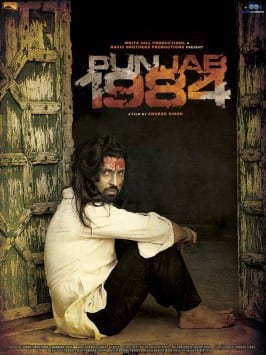 I had the opportunity to see the film Punjab 1984.  I almost decided not to go based on the reviews I saw online which claimed the film defamed the Khalistan movement and made Sikh fighters look like villains.

I’m glad I went anyways. I found the film to be thoughtful and able to present a nuanced picture of what took place.

I feel that those who found the film to be offensive perhaps haven’t lived through those days or aren’t familiar with what happened and how.  It could be a case of looking at the Movement with rose-colored glasses or trying to understand it as a simple binary of Good Guys-Khalistanis, Bad Guys-Punjab Police & Indian Government.

Things were never so simple.

—Punjab 1984 isn’t a propaganda film for the Khalistan Movement, nor should we have expected it to have been.  That having been said, I believe the film is positive towards the Movement and Daljit’s character, Shivjit Singh (Shiv) is a strong protagonist.

Like the main character in the film, many of the young men who joined the Movement were initially not particularly ideological or often even all that religious.  They were pushed into taking up arms by circumstances and the fact that there were few alternatives available to them.

The story in Punjab 1984 is one that happened all across Punjab. Family disputes, land disputes and other business disputes became thrown into and interwoven with the ongoing insurgency. Some people joined a Jathebandi to ensure their security or because a rival had joined another Jathebandi.  In many disputes about money or land, one side paid the police to frame their rivals in order to get rid of them.

Shiv is one such young man.  A neighbor takes advantage of the situation in Punjab to use the Punjab Police to intervene in a land dispute.  Shivjit Singh is tortured and sent to be eliminated in a fake encounter by the corrupt police officer.

After escaping police custody Shiv joins a Kharku group whose leader (Sukhdev Singh) is fiery and speaks passionately about Khalistan but in his personal life he clearly is not a Gursikh.  The leader, Sukhdev, engages in some actions which are clearly not justifiable according to Sikhi. In a scene depicting a meeting of Kharku leaders, there are serious disagreements and internal bickering.

That too is not an unusual story. Many prominent leaders of the Khalistan Movement such as Dr. Sohan Singh or Wassan Singh Zaffarwal have now been accused of being government moles who derailed the movement.  It is a also an unavoidable reality that the Khalistan Movement was internally very divided and many leaders did not get along.  The repeated formation and division of the Panthik Committees and the formation of countless splinter groups is a illustrative of that.

The plight of Shiv who does not agree with the way in which his leadership is taking the movement is also not unusual. In my discussions with families of young Sikhs who joined the Khalistan Movement for ideological reasons, I have been told more than once that the young Singh’s felt disappointed that not everything they saw was what they had expected or in accordance with the principles of Sikhi.

While many of us automatically assume that anything that went wrong in the Khalistan Movement was a result of government infiltration, the reality is not as simple.  While government agencies heavily infiltrated the Khalistan Movement, there were many individuals who got involved for self-interest. There was a criminal element who took on the mantle of Khalistan to continue their pursuits. And there were those who may have got involved with good intentions but were corrupted along the way. Not every Kharku was a Gursikh or behaved in a way that was consistent with the principles of Sikhi. This element of the Movement cannot be dismissed simply as a fringe, but played a major part and was also instrumental in its failure. Punjab 1984 shows some of that reality.

Some commentators have expressed outrage that the film showed Hindus being killed by “kharkus”. In fairness, the killings in the film are carried out by goons who are clearly not ideologically motivated fighters. Such incidents are also unfortunately a reality of what happened in Punjab.

I have read some commentary which claims no innocent Hindus were ever killed by the Movement. I think that sentiment is actually a positive reflection, if not a misguided one, as it shows that Sikhs continue to abhor the killing of innocents.

In reality, the killing of Hindus and non-Punjabi laborers was not a one-off occurrence. Those involved in these killings were sometimes blinded by hatred and the argument that “Hindus” had killed Sikhs in Delhi and other cities in November 1984. There was also a strain of thought among some that driving Hindus out of Punjab would speed the formation of Khalistan. This angle has been covered by several books, including the novel Kundliay Sup by Amardeep Singh Amar, a very well known and respected Khalistani writer.

There have also been objections to the scene in which Shivjit Singh’s group’s boss is seen drinking with a politician. That scene is in fact quite powerful and reflects an important reality. The politician is connected to both the police and the kharkus and says that those who are too ideologically committed to Khalistan make the best fighters but the worst politicians.  He says that even if Khalistan were to become a reality, it would be people like him who would make the government. The fact is that such politicians existed in the Sikh community in 1984 and continue to exist today who manipulate the community and Panthik sentiments for their own benefit.

The fact that these corrupt elements were drinking is hardly a shock.

Finally, some commentators have lamented that only the negative aspect of the Khalistan Movement has been shown and none of the spiritual Gursikhs who were involved were given any prominence. I would agree that the movie would have benefited from a character who was ideologically motivated to join the Khalistan Movement and was a spiritual Gursikh.  That having been said, the absence of such a character is not a fatal flaw.  This film cannot be expected to show every angle of the Movement in 2.5 hours.

Overall, the character of Shivjit Singh is a powerful one. It shows how young Sikhs were pushed into a fight that they had not wanted. It shows the confusion they felt, the obstacles they faced and the truly complicated world of the Khalistan Movement.

Rather than criticize this effort or trying to boycott it, it would be better for the community to take this film as an opportunity to reflect on the Movement and learn more. We should not be incensed when we are presented with the weaknesses of the Khalistan Movement. Not every personality involved in the Khalistan Movement or every incident that took place is one we need to defend. If we are to move forward as a community, we need to confront what went wrong and ensure we don’t repeat those mistakes.

Punjab 1984 is a thoughtful film. It requires reflection and nuanced analysis to fully appreciate. There is even some subtle symbolism and gentle nudges by the director if you are looking for them.

If you are looking for a pro-Khalistan  propaganda film that presents only one side of the story, you may be disappointed.

I thoroughly enjoyed Sadda Haq but I enjoyed this film as well. Go to see Punjab 1984 with an open mind. It certainly cannot reflect the entire reality of the Khalistan Movement but it does an admirable job of showing some important features of it. Features that we may not feel comfortable confronting but will have to in order to progress.