CHANDIGARH, Punjab—To oppose the ongoing misuse of state force on protesting farmers by the BJP led Indian government, the Sikhs of Punjab will stage a protest in Amritsar on February 13. This protest’s venue has been fixed near Jallianwala Bagh, where the protesters will hold a peaceful demonstration at 1 pm this Saturday. 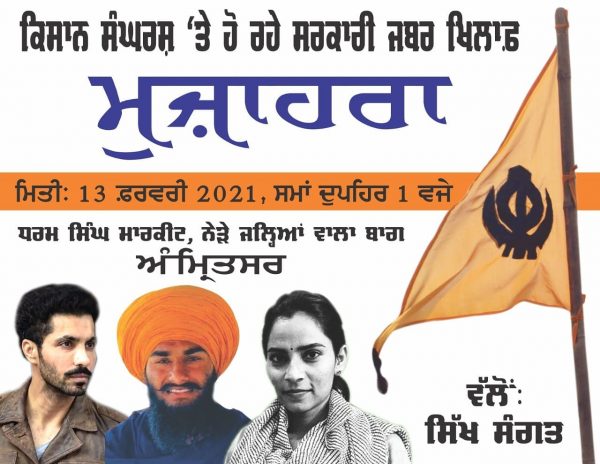 Notably, all three face state excesses just for being an active part of the farmers’ agitation.

Deep Sidhu has been fabricated in a case about the violence that occurred at Lal Qila on January 26, while Ranjit Singh is enduring judicial custody after brutal thrashing by the Delhi cops on the charges of “attacking an SHO with a sword.”

Similarly, labor activist Nodeep Kaur is also facing detention for more than four weeks just for raising a voice in favor of farmers’ agitation. During her custody, she also endured sexual abuse.

The Indian government has been facing widespread criticism globally, misusing state force on peacefully protesting farmers to suppress their voices. However, the Indian government is still not leaving any stone unturned to crush farmers’ fundamental rights of peaceful assembly and expression.

Latest media reports reveal that Twitter has once again suspended more than 500 accounts related to farmers’ agitation after being ordered by the Indian government.