CHANDIGARH, Punjab—Strongly condemning the Indian Government’s move of branding nine Sikhs associated with Khalistan struggle as “terrorists”, the Dal Khalsa and the Shiromani Akali Dal (Amritsar) has asked the Union Home Ministry to rectify its error. 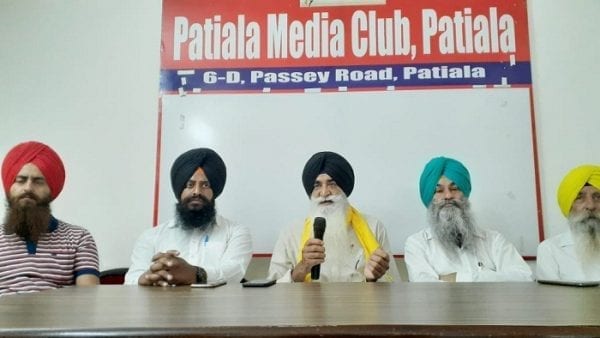 Addressing a joint press conference in Patiala on July 5, Dal Khalsa president H S Cheema and SAD (A) general secretary Mohinderpal Singh termed the Indian government’s move as an attempt to paint the image of Sikh Nation worldwide with “terrorism” brush, which is totally unacceptable and intolerable.

“Continuing with its anti-minority policies and mindset, the Union government under Narendra Modi has designated nine Sikhs associated with Khalistan movement as “terrorist” under amended draconian Unlawful Activities Prevention Act, 1967,” said they.

“We don’t see any justification or logic behind government’s provocative and illegal move. The timing of New Delhi’s move to target Khalistani Sikhs has raised eyebrows. The move looks like Modi government’s smokescreen to hide its failure to address disputes with all neighboring countries and to face the Chinese aggression,” observed Cheema.

Last year on Aug 5, the special rights of people of Jammu and Kashmir were snatched at gunpoint, then the heat was turned against Indian Muslims by amending Citizenship Act and now Sikhs are on the radar of the Modi government, they pointed out.

They said presently, 13 persons figured in this list- four are Muslims and nine are Sikhs. They took SGPC and Akali MP’s to task for not raising their voices and succumbing to BJP’s anti-Sikh tactics.

Making their position clear, they said “We stand by the goal of Khalistan through democratic means and are of the opinion that referendum or plebiscite is the only peaceful method to resolve conflicts. Being a main indigenous faces of the political movement for a sovereign Punjab or Khalistan, we have presented the Sikh case for referendum for Punjab under the aegis of United Nations at national and international fora a number of times”.

To a question on the referendum 2020 issue, they made it clear that they had no alignment with the ‘Sikhs For Justice’, but they stand by the democratic rights of all people to peacefully propagate their mission. There are only two kinds of referendums which can deliver results. One is UN sponsored and the other is conducted by an occupied country (read India). In the SFJ case, both are not involved. In July 2018, we had asked the organizers of the SFJ to clear all vagueness and ambiguity in their 2020 referendum proposal but got no response.

They condemned the state police for harassing Sikh youths under the guise of tackling the referendum 2020 campaign. The youth are being called to police stations, their pictures are being clicked, forms filled only to instill fear in their minds, which is totally undemocratic and illegal. They asked the Chief Minister Captain Amarinder Singh to intervene and direct the police to stop intimidating the youth.