AMRITSAR SAHIB, Punjab—Sumeet Singh Kalsi, who performed duties as a coordinator through the Bihar government during the ceremonies held at Takht Sri Patna Sahib on the occasion of the 350th birth anniversary of Guru Gobind Singh, paid obeisance at Sachkhand Sri Harmandar Sahib along with his wife. 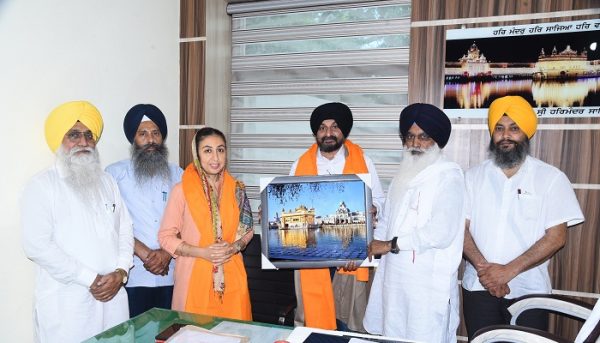 On this occasion, he was welcomed and jointly honored at the office of Shiromani Gurdwara Parbandhak Committee (SGPC) by the SGPC’s additional secretary Sukhdev Singh Bhurakohna, assistant secretary Balwinder Singh Kahlwan and superintendent Malkit Singh Beharwal.

On this occasion, S. Sumeet Singh said that he was relieved to pay obeisance at Sri Harmandar Sahib and thanked the SGPC for the honor.

Sharing his experiences of services rendered during the 350th Prakash Purab of the tenth Guru, he said that this historic occasion would always be a part of the psyche of the entire Sikh world as the social bonds of all humanity were strengthened with each other. He said that on this historic occasion he had received the service of coordinator under which he had served as the manager of Tent City on behalf of the Bihar Government.

Sumeet Singh Kalsi said that the people of Bihar had a deep reverence for the historical Sikh sites and on the occasion of 350th Prakash Purab, the locals stood in long queues up to 4 km waiting to pay their obeisance.