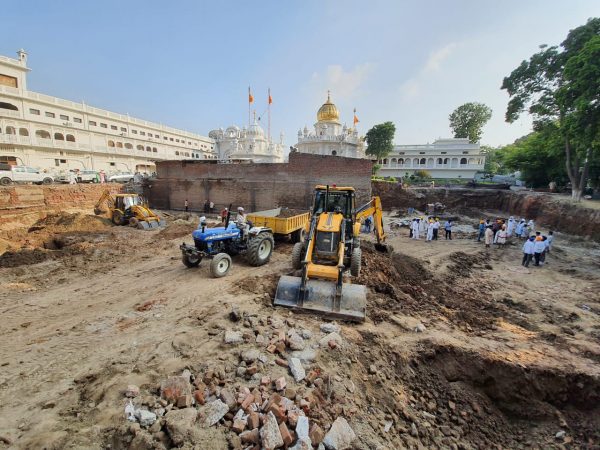 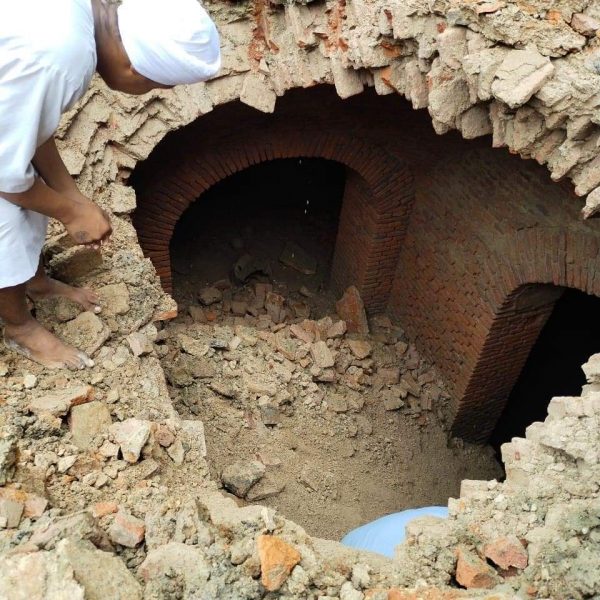 AMRITSAR SAHIB, Punjab: In a significant development, centuries-old structures have been unearthed at the construction site for Jora Ghar on the premises of Sri Darbar Sahib complex while excavating the site by the sewadars (volunteers) of Kar Sewa organization.

The site is situated outside the Akal Takht side entrance of Sri Darbar Sahib. Excavation of the site is continuing for many days and signs of the historic structures started being seen since day one as small bricks and foundations of the buildings were found on digging up the site. However, nobody bothered these structures which were considered as non-historical remains of the houses situated around the shrine complex in old times.

However, a beautiful tunnel like structure was found on Wednesday. However, the SGPC and Kar Sewa volunteers decided to bury it as such without bothering its historic and heritage importance. When its videos and photos went viral over social media, members of Sikh Sadbhawna Dal which is headed by Bhai Baldev Singh Wadala, surfaced at the site on Thursday and deterred the work of burying this beautiful tunnel. They demanded the structures be preserved.

On their complaint, SDM Vikas Hira along with cops intervened into the matter as the site is situated on the land of the government. On demand of the Sikh bodies, he got the work stopped at the site till next decision is taken with consent of the Sikh bodies which are enraged over the attitude of the SGPC and Kar Sewa volunteers toward the heritage structures.

On administration’s intervention, the SGPC stopped the work till the archeological experts examined these structures which are made of small bricks which were used for construction before British took over Punjab and annexed it to British India in 1849.  Thus, destruction of another heritage site was averted.

After facing backlash, the SGPC president Jagir Kaur started praising the historic structure and talking about its preservation. “The building will be preserved if found historic in the investigation”, she said.

She further said, “The Deputy Commissioner of Amritsar Gurpreet Singh Khaira has just told me that archeological experts of the government have been informed about it. A team from the archeological department will be visiting the place tomorrow. The SPGC will also call the historians to examine this structure. If it is found historical, it will be preserved. However, the matter should not be made controversial”.