Continuing to adhere to the anti-minorities policy of the BJP led Indian government, the social media platform Facebook has suspended the account of freelance Sikh journalist Papalpreet Singh for 30 days. 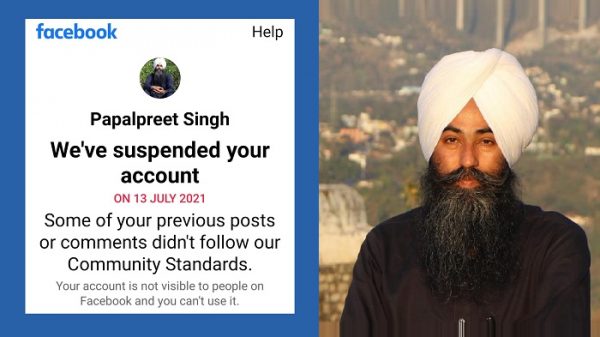 Facebook has been continuously oppressing dissenting voices in India after it purchased the 9.99% stake in Reliance Industries Ltd. (RIL) i.e. a corporate firm owned by Mukesh Ambani who had financially assisted BJP in gaining power in India during the 2014’s parliamentary polls.

It is pertinent to note here that Papalpreet Singh has been vocal on Sikh issues for a long time and blew the whistle on various prominent Sikh issues. He has also been doing charitable work for helping the needy and poor people.

Speaking to Sikh24, Papalpreet Singh informed that he saw a notification from Facebook informing him his account was suspended for 30 days when he tried to log in using the mobile application.

“In this notification, Facebook has mentioned that I didn’t follow the community guidelines while it’s a pure lie. I have been targeted for presenting the Sikh perspective on various issues and I know it very well that Facebook will not reinstate my account,” he added.

“I am a Sikh and I know how to socialize while being in the public domain. Rather than accusing me of violating community guidelines, Facebook should not hesitate in informing me that my account has been sacked on the directions of the ruling section of India,” he said.

In August last year, The Wall Street Journal had published a story exposing the pro-establishment policy of Facebook in India to defend its business interests. In this story, a leading Facebook executive was exposed for opposing the move to ban a controversial politician affiliated with the ruling class.