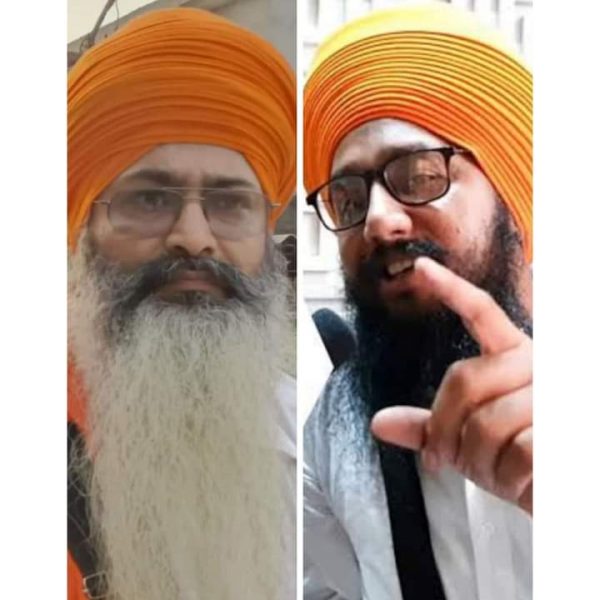 CHANDIGARH, Punjab: In an another instance of oppressing the minorities by the Indian state, two Sikh leaders were put behind bars by Punjab Police just for giving befitting reply to hate speech accused and notorious Hindutva extremist leader Sudhir Suri after he hurt Sikh sentiments by making highly objectionable remarks against Sri Darbar Sahib, the holiest Sikh shrine, and Sikh rituals.

Suri has at least six cases – mainly on charges of hurting religious sentiments and making casteist remarks – registered against him. He has been arrested several times and spent some time in jail. Despite his criminal character, he is going scot free while many Sikhs who are struggling for their rights, are languishing in the jails of India for decades.

The Punjab Police, which has a history of committing atrocities on the Sikhs, first booked and arrested Bhai Bhupinder Singh. The Police stated that Bhai Bhupinder Singh hurt Hindu sentiments. Now, it has arrested Rajpura based Sikh leader and social worker Bhai Barjinder Singh Parwana who was on fore front to ensure punishment to Suri.

A group of cops forcibly barged into the house of Bhai Parwana and carried out checking of everything there, making all his family members captive. Then, they took Bhai Parwana away and implicated him in a false case. The Police claimed that deadly arms have been recovered from him, while it is well known fact that Bhai Parwana is a social worker. His wife told that the Police are torturing him.

The Punjab and Haryana High Court advocate Simranjit Singh has come forward to pursue the case of Bhai Parwana.