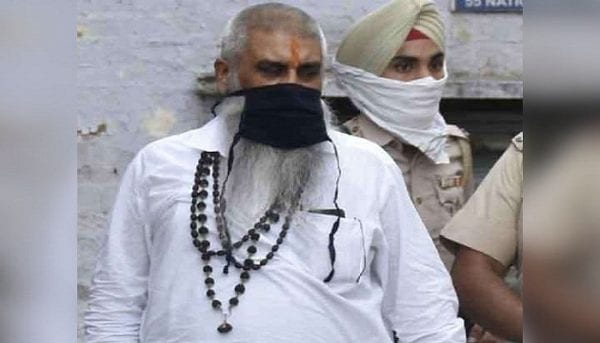 AMRITSAR SAHIB, Punjab: Sikhs are deeply enraged as Sudhir Suri, a Hindu fanatic leader and self-styled president of one of the factions of Shiv Sena, has crossed all limits by making derogatory remarks against Sri Darbar Sahib, age-old rituals performed there, langar organized by the Sikhs in gurdwaras and the Sikh martyrs.

The Punjab Police, which has a history of committing atrocities on the Sikhs, was not taking action against him first even as his remarks hurt the Sikh sentiments. It had booked and arrested Bhai Bhupinder Singh who gave a befitting reply to him in a video, instead. The Police stated that Bhai Bhupinder Singh hurt Hindu sentiments.

Taking a strong notice of the Police action against a Sikh, the Sikh organizations said the government does not bother the Sikh sentiments, but Hindu sentiments.

This act of Police further angered the Sikhs who had to stage a protest outside the residence of Suri in Amritsar Sahib and the Police station concerned today.

Under pressure of the sangat, the Police finally registered a case against him under sections 295-A (hurting religious feelings of any class by insulting its religion or religious beliefs), 153A (Promoting enmity between different groups on ground of religion), 506 (criminal intimidation) and 67B of Indian Penal Code (IPC) at Police station (B-division). The Police were not arresting him. It did it after the sangat mounted the pressure.

The case was registered against him on the complaint lodged by Ranjit Singh, a leader of Sikh Youth Federation Bhindranwala.

Suri also spoke against Sant Jarnail Singh Bhindranwale who is a great martyr for Sikhs. The complainant sought stringent action against him on ground that he committed an offence of inciting enmity between Sikhs and Hindus and hitting the peaceful atmosphere of Punjab.

Notably, he is also seen saying that “if Hindus stop going to gurdwaras, operation of langar will come to a halt”. He even says, “The langar is operational only due to the money donated by the tourists, not Sikhs”.

When Sikh leaders led by SGPC member Charanjit Singh Jassowal approached Suri at his residence for protesting him, the Police stopped them. Grandson of Sant Bhindranwale also came to participate in the protest.

Despite Suri making such highly objectionable remarks, the Police are not reining in such elements. Ironically, other genuine Hindu organizations are also mum on his comments and not condemning him.

Suri has at least six cases – mainly on charges of hurting religious sentiments and making casteist remarks – registered against him. He has been arrested several times and spent some time in jail. Despite his criminal character, he is going scot free while many Sikhs who are struggling for their rights, are languishing in the jails of India for decades.