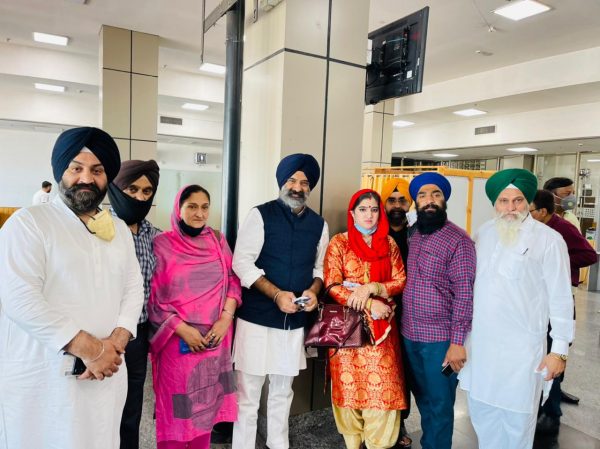 AMRITSAR SAHIB, Punjab: The issue of enforced conversion and Nikah (muslim marriage) of two Sikh girls from Jammu and Kashmir (J&K) has been resolved largely with special efforts of the Sikh leaders as one of them from Srinagar, was handed over to her family by the court following the persistent efforts of the Sikh community and thoughtful Sikh leaders.

Soon after her return, the Anand Karaj (marriage as per Sikh conduct) of Manmeet Kaur, 18-year-old girl, were performed with Sukhbir Singh, a local Sikh youth from Srinagar as per the Gur maryada (Guru’s conduct) at Rainawari Gurdwara Sahib in Srinagar on June 29.

“Thanking the Sangat for extending such an enthusiastic Welcome to Sikh daughter, Manmeet Kaur from Srinagar, who was forcefully converted but she has regained her freedom. She has come to Delhi with us today to take blessings and thank the Sangat for supporting her family”, said Manjinder Singh Sirsa, president of Delhi SIkh Gurdwara Management Committee (DSGMC), over social media.

Jagir Kaur said, “With the homecoming of Manmeet Kaur, the family has got relief. We hope that the second girl Dhanmeet Kaur would also be brought back soon. The government should set up a Minority Commission for minorities in Jammu and Kashmir to prevent such incidents in future.”

She urged the Government of India to ensure the safety of Sikhs in Jammu and Kashmir. “Sikhs were forced to migrate from the area which was once inhabited by a large number of Sikhs in J&K. Despite being a minority, the minority facilities are not being provided to the Sikhs which is demanded for a long time. Soon a letter will be written by the SGPC to the Home Minister of the Government of India”, said Bibi Jagir Kaur.

The SGPC chief appealed to the Sikh families to make their children aware of the values of the Sikh faith so that they would not be separated from their faith.

At the same time, the SGPC president encouraged the children to be firm in their faith by being aware of the Sikh history. “Both Manmeet Kaur and her husband Sukhbir Singh have been taken to Delhi by Manjinder Singh Sirsa. The efforts to bring back the second girl are being made as per the due procedure”, she added.

Notably, other Sikh leaders including former DSGMC presidents Manjit Singh GK and Paramjit Singh Sarna also played a role to ensure the return of the girl.

The girl was kidnapped and converted to Islam by a local named Shahid Nazir Ahmed. Ahmed was later arrested.