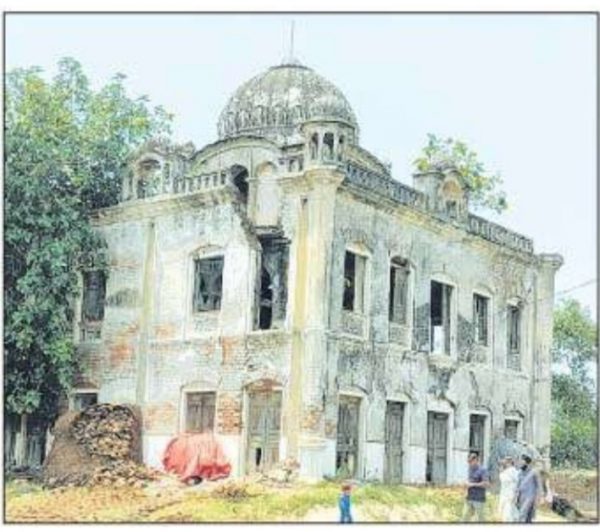 Gurdwara Nanaksar Sahib, which is associated with Guru Nanak Sahib and situated in Chakk Fateh Bhinder village in Daska tehsil of Sialkot district of Pakistan, is falling into ruins and needs immediate attention of the respective government.

Per a report published in Punjabi Daily Ajit, the historic and sacred place once visited by Guru Nanak Sahib has a two-storey Gurdwara building. It also has a sarovar (holy tank). However, sans maintenance and care, it is falling into ruins. Its ceilings have collapsed, and heaps of debris can be seen inside. The gurdwara premises spread over four kanals of land and had Diwan (congregation) Hall, Langar Hall (community kitchen), and rooms of devotees. However, only ruins have been left behind. The local Sikh community has been seeking its immediate renovation, restoration and maintenance, but the government has never paid attention.

The Shiromani Gurdwara Parbandhak Committee (SGPC) president Jagir Kaur has written a letter to the Pakistan government and urged them to pay special attention to the shrine’s maintenance by getting the shrine repaired immediately.

In a press note released from the SGPC office on Tuesday, she said that it has come to her notice through the medium of newspaper that, “The roofs inside Gurdwara Nanaksar Sahib building are collapsing and it is important to repair them immediately. The religious shrines are a guide for the people to walk on the path of life, rights and truth.”

“The sentiments of Sangat (devotees) are attached with the shrines associated with the Gurus; therefore, it is important to pay special attention towards the maintenance of these buildings”, said Jagir Kaur.

She said, “If the Pakistan government has any difficulty repairing or rebuilding the Sikh shrine, then the service of this Guru Ghar (house) should be handed over to the Shiromani Gurdwara Parbandhak Committee, Sri Amritsar. The SGPC is ready to do Sewa (voluntary service) at this place.”