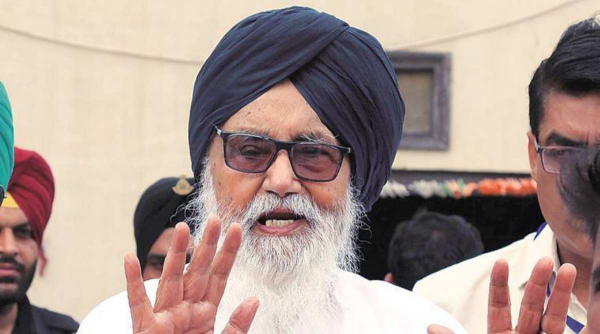 In a video clip made on Saturday, Badal talks to Bahujan Samaj Party (BSP) chief Mayawati over the phone in high spirit and congratulates her for the SAD-BSP combine. He also tells her that he is quite well now. However, in the case of the investigation of Kotakapura case, he cited that he could not join the probe on June 16 as his doctor had advised him to have complete bed rest for 10 days.

Having jibed at Badal over his excuse, the Aam Aadmi Party (AAP) Punjab President and Member of Parliament Bhagwant Mann referred to this video clip that has gone viral over social media during a press conference held at Chandigarh.

The SAD patriarch, who is prime accused in the Kotakapura firing, has also sought rescheduling of the date of his appearance before the SIT.

On the one hand, Badal states in a letter written to the SIT chairman that he has complete faith in the judiciary and he will cooperate with the SIT; on the other, he is terming “political vendetta” behind the investigation.

After the Punjab and Haryana High Court quashed the SIT report led by the then IG Kunwar Vijay Partap, the Punjab government constituted this SIT. However, badals opposed the previous SIT.

CONTENT OF BADAL’S COMMUNICATION TO THE CHAIRMAN , SIT is given below:

I was similarly asked to join an identical investigation by the now defunct SIT. The investigations by that SIT were quashed by the Hon’ble Punjab and Haryana High Court.

With regard to my appearance before the new SIT headed by you, I wish to submit as under:

Although the entire process of investigations into the said case stands brazenly compromised through blatant and unapologetic political interference and although it reeks too strongly of political vendetta to inspire any confidence about a fair process of law, yet I have repeatedly and categorically declared my intent and commitment to cooperating fully with the law, as I have complete faith in the judiciary.

Accordingly, I wish to inform you that I will cooperate fully and whole heartedly with the process of investigations by the fresh SIT. I also hope that this SIT, unlike the previous one, would respect the law of the land and conduct a fair investigation, withstanding the political interference from the ruling dispensation which is known to be brazen in subverting the law for their personal political gains.

The present SIT had been set up in the wake of the brazen politicization of the previous SIT. The overtly political conduct of one of its members had allegedly subverted the entire investigative process. With a callous and contemptuous disregard for all the established procedures and norms, the officer completely usurped and appropriated to himself the entire functioning and designated role of all the other members of the SIT, including it Chairman , and rendered them  totally redundant.  In the process, all the other members of the SIT were reportedly not even a part of the investigative process.  This was an unprecedented subversion of the legality, constitutionality and procedural propriety in the investigative process, turning the whole investigative exercise into an absurd political farce

Predictably, the Honourable High Court quashed the fictional narrative. There were reports, never contradicted, that the SIT findings had been authored jointly by half a dozen high profile members of the ruling party.

The Honourabe High Court made observations which are self speaking, before setting aside the investigation conducted by the previous SIT.

I hardly need emphasize that all through my long career as a servant of the people, I not only have been a law abiding citizen of the country but have always ensured that the law of the land is held in the highest esteem. As such, I am committed to cooperating with investigations underway.

However, my current state of health does not permit me to be available to join the investigation on the date specified by you. I have been advised complete bed rest of ten days by my physician; I am enclosing the Medical Certificate dated 8.6.2021.

As soon as my health gets better, I will be available to join the investigation as per law, at my current place of residence   i.e. MLA Flat No 37, Sector 4, Chandigarh. Accordingly, I request you to reschedule the date for my appearance for the investigations.

I will look forward to hearing from you in this regard at the earliest.