On the call of Sanyukt Kisan Morcha, farmers across Punjab and Haryana staged protests against the three contentious farm laws today. Notably, the BJP led Indian government had introduced these anti-farm laws on June 5 last year through ordinances. 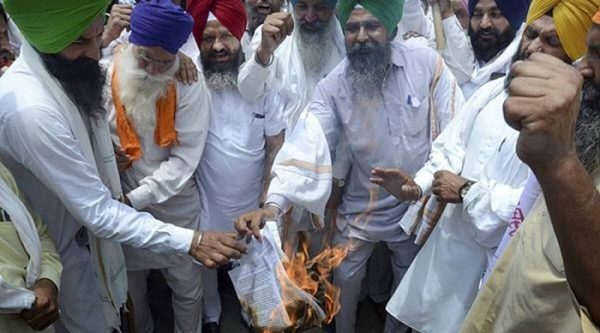 The Sanyukt Kisan Morcha, an umbrella body of the protesting farmers’ unions leading the fight against the farm laws, had given the call to mark June 5 as “Sampoorna Kranti Diwas”.

Accepting the call, farmers across Punjab and Haryana staged protests while burning the copies of these farm laws and rounding up the residences of BJP leaders.

Farmers carrying black flags raised slogans against the BJP-led Indian government for not scrapping the legislation, which will destroy the farming community.

In Phagwara, farmers burnt copies of the farm laws near the residence of Union minister Som Parkash at Urban Estate. The protesters assembled near the GT Road and marched towards his residence.

It is pertinent to note here that millions of farmers have been struggling against these contentious farm laws. Thousands of farmers are still camping at Delhi borders, demanding repealing these farm laws and a new law guaranteeing minimum support price (MSP) for their crops.

Several rounds of talks between the agitating farmers and the government have failed to break the deadlock over these contentious laws.

The government last held talks with farmer leaders on January 22. However, the talks between the two sides came to a halt after a January 26 tractor parade by farmers in Delhi turned violent.