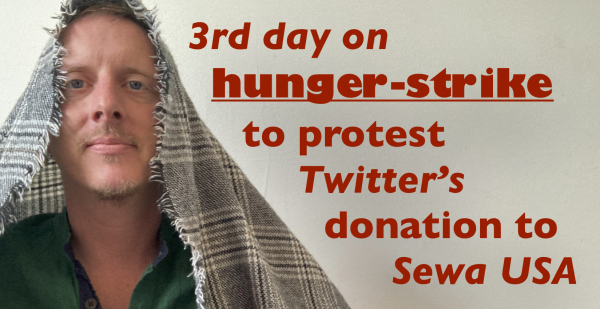 “It is now over 48 hours since I have eaten anything, and I am entering my third day of the hunger strike to protest Twitter CEO Jack Dorsey’s $2.5 million donation to Sewa International USA, a nonprofit linked to the RSS, which is a violent Hindu nationalist paramilitary in India.”

The above message was shared by Pieter Friedrich, a US-based activist who has been vocal against the rise of Hindu extremism in India and abroad. Pieter is on an indefinite hunger protest to raise awareness against RSS-linked organizations which are established in the United States.

Sewa USA is connected to Sewa International in India, which is itself affiliated with Sewa Bharati, which is the social service wing of the Rashtriya Swayamsevak Sangh (RSS), a Hindu nationalist paramilitary that is implicated in countless incidents of violence against minorities, including pogroms.

Earlier in a press statement shared with Sikh24, Pieter said that over the past 20 years, reports have repeatedly exposed how donations made for disaster relief purposes to chapters of Sewa International have been given to organizations in India that are connected to the RSS and possibly even directly linked to RSS-sponsored anti-minority violence.

A petition was also started by Pieter urging Jack Dorsey to take back his support to Sewa USA. Pieter’s petition now has close to 3,500 signatures.