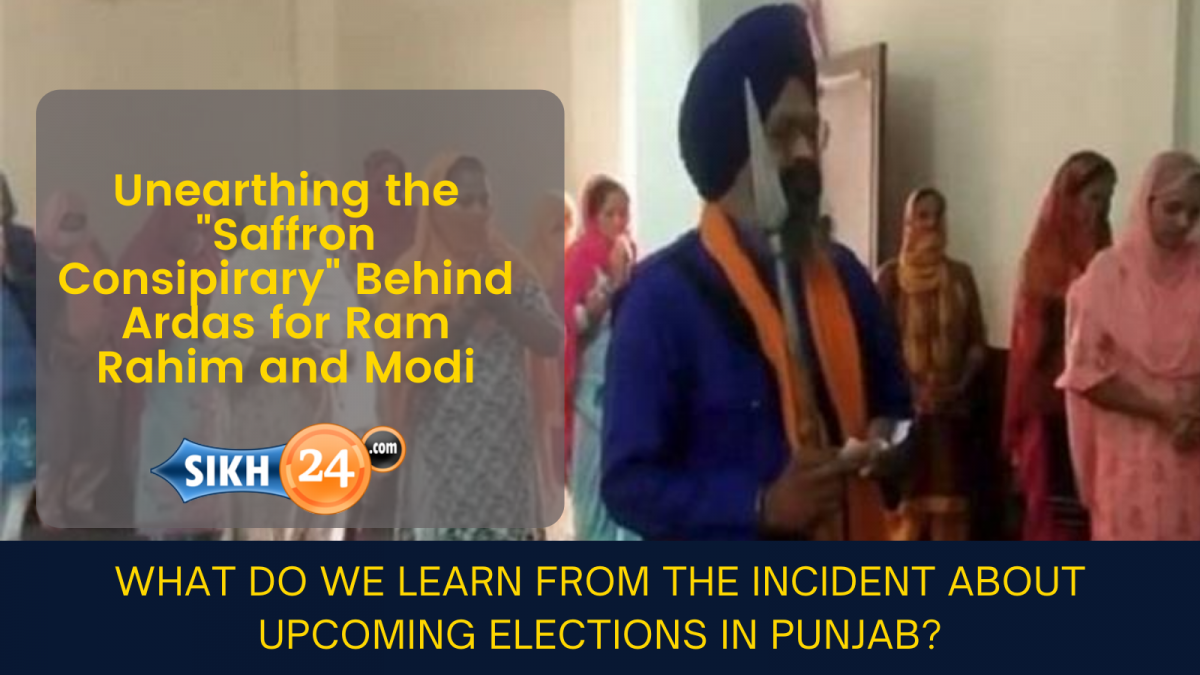 Hindu fascist political party Bharatiya Janata Party (BJP) has extended support to the person, namely Gurmail ‘Singh’, who performed ardas in a gurdwara in Bathinda’s Bir Talab village for release of the rapist and self-styled “messenger of God”. By doing so, the BJP has given many clues about the conspiracy it has hatched to create a rift between the Sikhs ahead of the 2022 assembly elections.

To understand the incident that enraged the Sikh masses, one needs to go through the chronology of the events.

In the words of the Shiromani Gurdwara Parbandhak Committee (SGPC) senior member Sukhdev Singh Bhaur, “The incident happened days after Punjab Police arrested six dera followers in case of Guru Granth Sahib’s sacrilege. Two days after the so-called ardas, Ram Rahim was released from jail. And only BJP leaders came in support of the man who desecrated the concept of Sikh ardas. They made it a Dalit issue by choosing a Dalit Sikh to implement this malicious design”.

On the other hand, no Dalit organization or activist came in support of Gurmail. The question arises why only BJP leaders turned exuberant over this issue.

Interpreting this incident, Sikh leader Harjit Singh Dhapali said, “This incident has not taken place all of sudden. It means that the BJP is gearing up to contest the 2022 assembly elections of Punjab. So, we need to be very conscious. We must go through the root of this act. We should reach out to one who is behind the act to unearth additional details.”

Suspicious presence of three persons in the gurdwara

Two videos of Gurmail have surfaced over social media. In the first video, he is seen in white Kurta-Pajama and praising Prime Minister Narendra Modi, while in the second one, he is seen in an attire of Nihang Singhs and praying for the release of Ram Rahim and well being of Modi.

As per a story published in Bathinda edition of Punjab daily newspaper ‘Punjabi Jagran’ on May 23, Gurmail himself arranged a person to make the first video, while for the making of second two unknown men one unknown woman specially came from outside.  One of two men shot the so-called ‘ardas’.

“It is being assumed that these persons gave shape to this conspiracy. Considering the matter dubious, Gurdwara’s Granthi Singh Bhai Sukhchain Singh asked the person making the video to introduce himself. The person told him that he was a journalist and had come from Bathinda city. Movement of these suspicious persons has been recorded by CCTV cameras and footage of the moment has been taken by the Police for investigation”, reported the newspaper.

The BJP leaders took no time to actively support the person who committed this blasphemy. A day after his arrest, senior BJP leader and Chairman of National Commission for Scheduled Castes Vijay Sample summoned the Bathinda cops with a report. He asked the cops to explain on which grounds the person has been arrested and charged with a section 295-A (deliberate and malicious acts, intended to outrage religious feelings of any class by insulting its religion or religious beliefs).

Criticizing the Police and state government for the FIR against the accused, he said he found no ground in the FIR for charging 295-A of IPC against him. He said Gurmail did nothing wrong by stating in the ‘ardas’ that he would take Ram Rahim to the gurdwara in the presence of Guru Granth Sahib.

Pertinently, he made it an issue of “discrimination with Dalit”.  He said stringent action had been taken against Gurmail as he belongs to Scheduled Castes. “Secondly, he wished to have a Dalit Chief Minister of Punjab and thanked Modi for showing them dream of CM from Dalit community. This is also the reason behind the FIR registered against him,” he added.

It is worth mentioning here that the BJP played smart to raise this issue. Before the arrival of Sampla in Amritsar Sahib, a message was shared in the Whatsapp group of local reporters which Sikh24 is a part of. This message was written so that the reporters were made to ask him questions about the so-called ardas issue. It was shared by a reporter who is known for his inclination towards the ideology of RSS, the parent organization of the saffron party. As the BJP wanted, the first question asked to Sampla at Sri Guru Ram Das Jee International Airport was about this row. And Sampla was quick to reply to this query in detail. So, the BJP leader appeared before the media after proper homework.

On the other hand, Punjab BJP vice-president Rajesh Bagha termed the arrest a clear case of muzzling voices of Dalits.

Leading English Daily The Times of India quoted him as saying, “Granthi Gurmail Singh praising PM Narinder Modi’s decision to make a Dalit the chief minister in Punjab and prayed for his good health in the ardas, after which at the behest of the Congress leaders, advocate Harpal Singh Khara complained to the police, and the Dalit granthi was arrested. It is clear from all this that ruling Congress does not want a Dalit to become CM of Punjab.”

It is noteworthy that both these persons are Dalit faces of the BJP in Punjab, and the party tried to divide the people of Punjab into caste lines. Through them, the saffron party attempted to project that people of other castes did not want Dalit CM in Punjab. Thus, it wants to polarize the Dalit community in Punjab to garner their votes as it has been polarizing Hindus across the Indian union.

Denying the charges, Advocate Khara said, “My complaint is only against granthi’s reverential reference to Dera Chief, who is a convict in a rape case and had sacrilege committed, apart from imitating Guru Gobind Singh and hurting Sikh sentiments”.

“Can these BJP leaders tell if ardas can be performed for Aurangzeb or Wazir Khan who got younger sons of Guru Gobind Singh executed or Massa Ranghar who desecrated Darbar Sahib?” he asked.

In fact, there was no mention of his prayer for Modi’s good health in the complaint lodged to the Police.

We are yet to see if BJP will make additional attempts to polarize the voters of Punjab by using divide and rule tactics, or if the voters here can outsmart the saffron party at its divisive agenda.