After Ravi Singh Khalsa, a number of other prominent Sikhs have asked Manjinder Singh Sirsa to return the donation 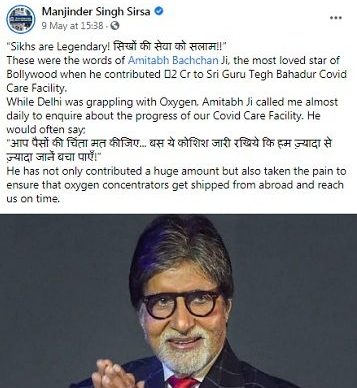 Bibi Nirpreet Kaur has written a letter to the SGPC appointed Akal Takht Jathedar Giani Harpreet Singh asking him to summon Manjinder Singh Sirsa for praising Amitabh Bachchan because he is accused of instigating mobs against Sikhs during the 1984 Sikh genocide.

She has recalled that Bibi Jagdish Kaur had also presented proofs about Amitabh Bachchan’s role in the 1984 Sikh genocide to the Akal Takht.

“The DSGMC has hurt Sikh sentiments by accepting a donation from such a tainted personality who played a key role in massacring innocent Sikhs during the 1984 Sikh genocide,” she said.

Meanwhile, it is learned that scores of the 1984 Sikh genocide victims led by Babu Singh Dukhia visited the DSGMC office on May 10 to ask DSGMC leadership for returning the INR 20 million donated by Amitabh Bachchan for Covid Care Centre.

“Had Amitabh Bachchan been interested in the Covid Care Centre, he would have contributed INR 20 million silently, but the way his contribution has been highlighted, all it seems preplanned and fabricated,” said Babu Singh.