The Sikh leaders gathered on the entrance plaza of the holiest Sikh shrine to honour him. While addressing the gathering, they lauded the role of Kunwar Vijay Partap Singh. 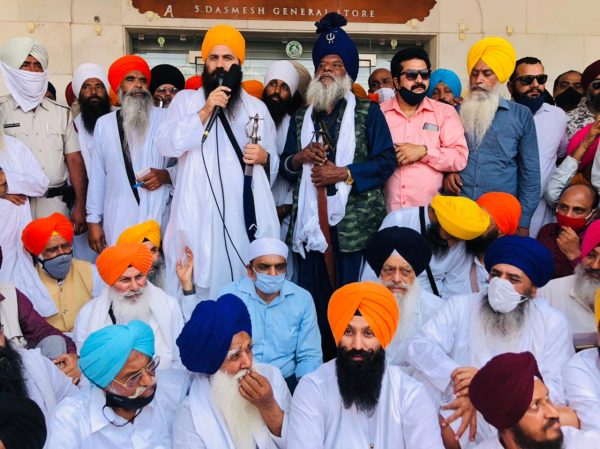 Daduwal said, “It is an open truth that Badals-led cops shot dead the Sikh protesters who were seeking action against the culprits of Guru Granth Sahib’s sacrilege. It was Kunwar Vijay Partap Singh who recognized this truth in the report of investigation he carried out. However, once again Indian judiciary turned a hurdle in the way of justice for Sikhs and quashed the probe. Kunwar Vijay Partap Singh has been honoured for his contribution in this case”.

After being honoured, Kunwar Vijay said, “I carried out the investigation with full transparency and fairness with the grace of Guru Gobind Singh. Each of its lines is evidence itself. I cannot comment on the verdict of Punjab and Haryana High Court, but it was pronounced without going through the evidences and witnesses we submitted in District and Session Court of Faridkot where the case was under trial”.

“I have been honoured for my integrity and character. I vow to maintain this integrity and character. I shall fight the battle for justice with higher spirit after this great honour. I have resigned from my job listening to my conscience. It was the need of the hour to quit it and start a new battle that is to save Punjab. We shall transform Punjab and make it progressive state where everyone gets justice”, he added.

The Sikhs had high hopes on the report prepared by Vijay Partap who even brought the role of the then Chief Minister Parkash Badal and his deputy and son Sukhbir Badal under scanner, besides indicting the Police officials appointed by Badals. However, the High Court buried the hopes.