During the first day’s events, the bhog (culmination) of 20,000 Sehaj Paths were held jointly by the sangat. Due to Covid-19, the events have been held symbolically. Some sangat participated in the bhog of Sehaj Paths at Gurdwara Sri Manji Sahib, while others joined in the same through various channels. The sangat that held bhog of 20,000 Sehaj Paths belong to different countries, which was inspired by the SGPC in association with Sri Sehaj Path Sewa Lehar organisation. 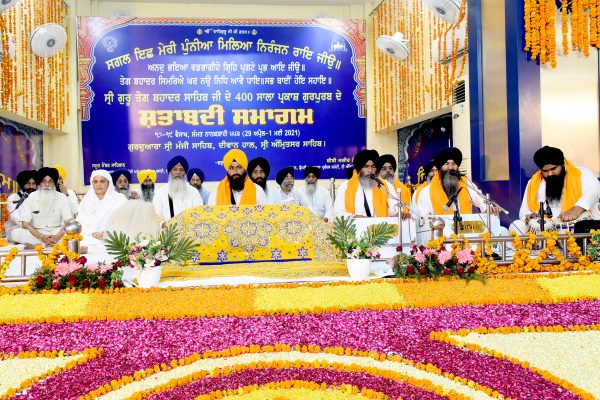 On the centenary day, bhog of Sri Akhand Path Sahib will be held on May 1 at Gurdwara Guru Ke Mahal and a function will be held at Diwan Hall Gurdwara Sri Manji Sahib.

SGPC president Jagir Kaur said that the centenary celebrations were being held in a symbolic manner due to Covid-19. She said that live coverage has been arranged on various channels to connect the sangat with the centenary celebrations. She said that although in view of the present Covid-19 situation large-scale events could not be held. She said but the devotion of the sangat is of the utmost importance. The sangat which want to pay homage to Guru Sahib should not be stopped and the government should also consider giving one-day relaxation from lockdown, said she.

A special Kavi Darbar was organized at Gurdwara Sri Manji Sahib Diwan Hall to mark the centenary. On this occasion Panthik poets introduced the history of Guru Tegh Bahadur Sahib to the sangat through their poems