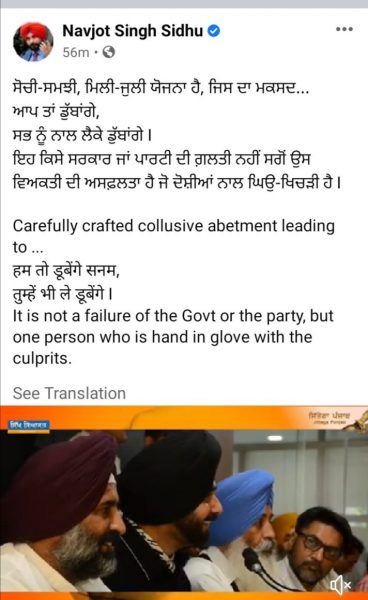 In a revolting manner, Cricketer-turned-politician and Congress MLA Navjot Singh Sidhu today launched the biggest ever attack on Punjab Chief Captain Amarinder Singh over social media, hinting at his nexus with the Badal family which is accused of playing a role in Guru Granth Sahib’s sacrilege episode and protecting Sukhbir Badal’s brother-in-law Bikram Singh Majithia from the action in a drug smuggling case. However, once again, he did not name anyone while launching the attack.

In a post shared over social media, Sidhu said, “Carefully crafted collusive abetment leading to ‘aap ta dubange, sab nu naal lai k dubange’ (we will not drown alone, will drown all too)”.

“It is not a failure of the Govt or the party, but one person who is hand in glove with the culprits”, he added.

In this post, he shared a video containing clips of related utterances he made during press conferences and political rallies in the past. In these utterances, he is hinting at a generally perceived secret nexus between the Punjab Chief Minister and Badals. As the Amarinder-led government did not defend the probe conducted by IG Kunwar Vijay Partap Singh-led SIT in Punjab and Haryana High Court that quashed the probe, people have started believing that Amarinder is nexus with Badals-Majithia.

He has made this statement when the perception is back in Punjab that Captain Amarinder Singh is protecting the former Punjab Chief Minister Parkash Badal and his son Sukhbir Badal. Under the regime of both, the Police shot dead two Sikh protesters at Behbal Kalan when the Sikh Sangat demonstrated peacefully to get justice in the sacrilege case in 2015.

On April 20, Sidhu said in another post, “What is the action taken by Govt for punishing Drug Kingpins? Reports, investigations and evidence by efficient cops, yet big fish roam free while small-fry’s rot in jail. …Why the Powerful behind the Drug trade who nearly destroyed a generation of Punjab not punished?”.

Before this, Sidhu also criticized Capt Amarinder for allowing Delhi Police to torture and mercilessly thrash a youth in the territory of Punjab and asked his government to learn lessons from West Bengal Chief Minister Mamata Banerjee, who made a CBI team captive in her state.

He said this a day after Lakhbir Singh alias Lakha Sidhana’s cousin brother Mundi Sidhana was abducted by the Delhi Police’s special cell in Patiala. Mundi Sidhana is a law student in Patiala and had gone to his university to partake in an exam when he was abducted by the Delhi Police and beaten up mercilessly. Mundi was later admitted to a hospital in Bathinda in critical condition. Lakha Sidhana confirmed that the same team of the police that arrested Deep Sidhu was the one that abducted his cousin.