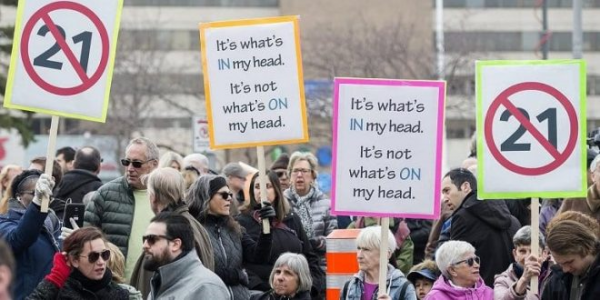 While the World Sikh Organization of Canada is pleased that the Quebec Superior Court has struck key provisions of the province’s “secularism” law, known commonly as Bill 21, the battle to have the law struck in its entirety must continue.

The WSO and Quebec educator Amrit Kaur were interveners in this case.  Amrit Kaur, a WSO Board member who is a practicing Sikh and wears a turban as a part of her beliefs, was forced to relocate to British Columbia in order to pursue her profession.

While the Quebec Government has invoked the notwithstanding clause to insulate the law from Charter scrutiny, in a ruling issued today, Justice Marc-André Blanchard found that Quebec’s “Act respecting the laicity of the State” is in violation of Section 23 of the Charter of Rights and Freedoms as it protects minority language education rights and cannot apply to the Quebec English education system.  Section 23 rights are not subject to the notwithstanding clause.

The ruling also applies to members of the Quebec National Assembly who cannot be forced to uncover their faces to exercise their functions.

Amrit Kaur said, “I am very pleased that today’s decision allows teachers like myself to work in the Quebec English education system. However, this victory is bittersweet since teachers in French schools, police officers and lawyers still cannot work with their articles of faith.  Bill 21 continues to pose an unprecedented challenge to minorities in Quebec.”

WSO President Tejinder Singh Sidhu said today, “while we are pleased that the Quebec Superior Court has struck key provisions of Bill 21, we are disappointed that the law was not struck down and declared inoperative in its entirety.  It is almost inevitable that this decision will be appealed and we continue to review the decision with our legal team as we decide on next steps to challenge this unjust law.”

The World Sikh Organization of Canada (WSO) is a non-profit organization with a mandate to promote and protect the interests of Canadian Sikhs, as well as to promote and advocate for the protection of human rights for all individuals.