Home Articles Op/Ed Op/Ed – Bhai Jagjit Singh (UK) Reflects On His Visit to Indiana...
Facebook
Twitter
Pinterest
WhatsApp
I was fortunate a few years ago to go to Indiana, USA, and speak at the Gurdwaras there. There is a significant Sikh population there. Many of them in trucking, moving from New York and California for cheaper cost of living.
They live in places like Greenwood, where they feel safe in Sikh/Punjabi areas.
Fed Ex facility has 95% Punjabi employees. It seemed to be a place where these families supplemented incomes and found a social scene from reports. They spoke their language, shared cha (tea), joked, and felt useful.
The USA is a vast country, and Sikhs, while a visible community, can regularly feel out of place like many immigrants do. It’s very unusual to have a workplace full of so many Punjabis.
This is why the heinous attack by the young white male is so hurtful. He shot an elderly Bibi who was picking up her paycheck a few days before her granddaughter’s engagement ceremony, an elder Sikh who had only worked there a week so he would not be bored at home.
When I talk of the impact of white supremacy in our media and history taught in schools. This is an effect of that. An insecure white male shot brown people because they dominated a workplace. He felt out of place like every immigrant feels every day in many countries. Often these white male shooters will claim they are keeping the USA white. They have a terrible track record of carnage.
If educators taught real human history instead of white history in schools, then children of the USA would know that the largest genocide in human history happened when white European settlers killed 100 million tribes of brown people. The ancestors of Indiana looked more Sikhs than the white male shooter. But this is never discussed in media or schools.
Campaigns like Black Lives Matter and Stop Asian Hate are trying to redress this white supremacy education and media bias.
What can Sikh do about the events of Indiana and Oak Creek? We can do what Jagmeet Singh is doing in Canada, which is calls for the banning of white supremacy groups. Sikhs need to try and be more vocal in media, and Sikh organizations need to stop speaking as bodies of appeasement and be part of the global conversation called for People of Colour to matter. The most important part of fundamental human history needs to be taught in schools rather than white-washed history.
The USA has a toxic obsession with guns, unable to recognise that mental health, legalization of drugs, and race issues are dangerous and quite irresponsible. Decades of weak governments and Fox News have made groups like NRA so powerful.
The Sikhs of Indiana were doing their part as members of civilized society. The world is multicultural and beautiful. It cannot be whitewashed to suit white makes, no matter how uncomfortable they become.
I urge Sikhs to be vocal and challenge the structures and narratives that create domestic terrorism, such as white supremacy.
Below a list of the names of the victims. 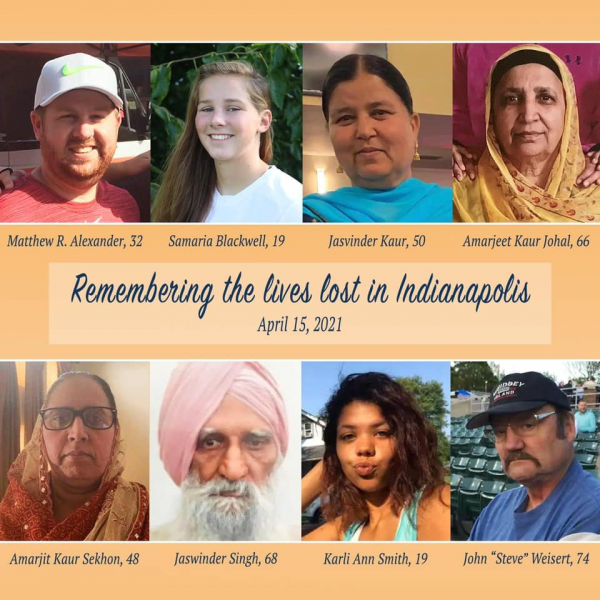