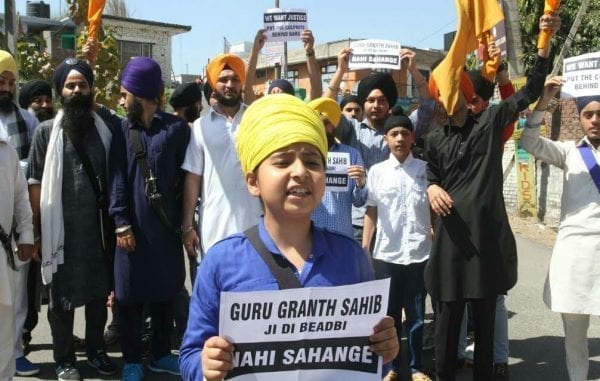 By killing the rare hope for justice in the episode of Guru Granth Sahib’s sacrilege in Bargari village of Faridkot district, the Indian judiciary, which is declared as “independent” and “impartial”, has caused another wound on the already wounded Sikh psyche.

The Sikhs, who have already been struggling for their survival by protesting three draconian farm laws enacted by the BJP-led Union Government of India for the last several months, shocked to hear about the High Court ruling that quashed the probe reports submitted by Punjab Police in two FIRs registered in connection with 2015 post-sacrilege Kotkapura Police firing that injured peaceful Sikh protesters.

The Sikhs had high hopes on the report prepared by Vijay Partap who even brought the role of the then Chief Minister Parkash Badal and his deputy and son Sukhbir Badal under the scanner, besides indicting the Police officials appointed by Badals. However, the High Court buried the hopes.

The Indian state has victimized the Sikhs since India’s decolonization, but the “third pillar of the democracy” never delivered them proper justice.

Under the river-water disputes, the Supreme Court of India never favoured Punjab’s rights, going against the international riparian laws and Basin rules. Culprits of 1984 Sikh carnage, which was conspired to carry out genocide of the Sikhs in various parts of India, are still going scot-free, thanks to the high courts and Supreme Court rulings. Congress leader Jagdish Tytler is the biggest example of the injustice done to the Sikhs. Thousands of innocent Sikh men, women, children, and elderly persons were eliminated and disappeared by Indian security forces in the 1990s on the pretext of countering insurgency in Punjab. Still, the rare victim family has got justice so far. The former Punjab DGP KPS Gill, who was considered the second biggest perpetrators of these extra-judicial killings and enforced disappearances, died being brought to justice.

There are many other cases in which the Sikhs have experienced justice, neither from the government nor from the courts. In current history, Bargari sacrilege was the largest wound that shook a Sikh deeply. Ironically, its culprits dared to commit this sin during the Shiromani Akali Dal (Badal) government, which claims to be the sole representative party of the Sikhs. The needle of suspicion went towards the followers of Sirsa based a notorious Dera led by rapist Gurmeet Ram Rahim. Even as they openly took responsibility for this sin through posters, the so-called Akali government did not take any action against them. Rather its police gunned down two Sikh protesters seeking justice of sacrilege peacefully at Behbal Kalan village. The cops also opened fires on the peaceful Sikh protesters at Kotakpura. However, Badals did not punish any Police officer for these killings.

After the change of regime in the state in 2017, a ray of hope glimmered for justice, but the Chief Minister, Captain Amarinder Singh’s role in bringing the culprits to justice also turned out to be dubious like Badals. Now, he is on the radar of everyone as his government has failed to defend the High Court’s probe report.

Congress Rajya Sabha MP Partap Singh Bajwa has also held the state government responsible for the development. In a statement, he said, Punjab’s advocate general (AG) and other Punjab government lawyers did not ensure that the High Court does not issue this order that has hurt the Sikh sentiments across the world.

As Vijay Partap is the only Police officer who is perceived to be challenging the influence of Badals and has the courage to take action against the Police officers who delivered the firing order and were his seniors at the moment, the Sikh masses have reacted to the court decision in a very harsh manner.  Reacting to the development, Vijay Partap has sought early retirement from the job. In a fix, the Chief Minister has rejected his plea.

As deep resentment prevails in the Sikhs against the High Court ruling, various Sikh groups are gearing up to launch a stir to seek justice in this episode. The Sikh leaders, along with aggrieved family members of those killed by cops during post-sacrilege demonstrations, will hold a protest on April 19 at Punjab and Haryana High Court’s doorsteps against rejection of SIT report on the Kotkapura incident.

While announcing the protest plan, Paramjit Singh Mand, President of Sikh Youth of Punjab,  said the said judgment of the High court had dashed all the hopes of justice in aggrieved family members and community.