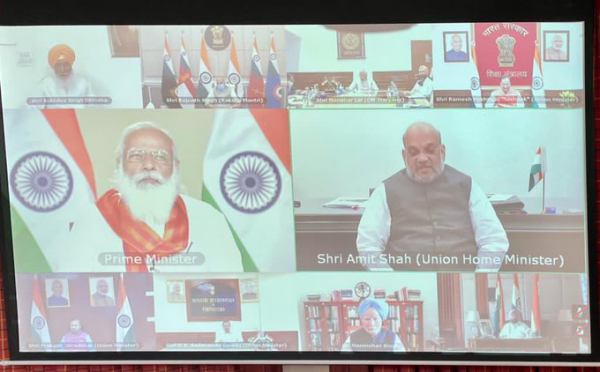 BJP-RSS led Union Government of India may saffronize celebrations of 400th Parkash Gurpurb (birth anniversary) of ninth Guru Sri Guru Tegh Bahadar Jee this year and it would be against the aspirations of the Sikhs as the Shiromani Gurdwara Parbandhak Committee (SGPC) has already said that it would not invite Indian Prime Minister Narendra Modi to the main event being organized by it at Amritsar Sahib to mark the historic occasion.

Elaborating on the discussions in the meeting in a press release issued by the Press Information Bureau (PIB), the Prime Minister said that to connect more and more people to commemorate the 400th Parkash Purab, various activities will be organized throughout the year. He said that the organisation of activities should be such that not only the life and teachings of Guru Tegh Bahadur Jee, but of the entire Guru Tradition is propagated worldover. He also said that proper research and documentation on this aspect of the Sikh tradition should be done.

As the RSS has a history of distorting Sikh history and Hinduising Sikh principles, the Sikhs need to be conscious of these activities. The apprehensions cannot be ruled out that it may saffronize these activities.

We have so many examples of the attempts made by it and its so-called Sikh wign ‘Rashtriya Sikh Sangat’ to saffronize the Sikh faith which has its own distinct identity and socio-religious order.

Bhai Mati Das jee is a famous Shahid of the Sikhs who happily faced death by being sawn alive but did not forsake his faith. Bhatt Vehis record the history of this Shahid and it is known that Bhai Mati Das’s grandfather, Bhai Paraga jee was a Sikh of Guru Hargobind and also became a Shaheed in the battle of Ruhila.

Bhai Mati Das jee was of course then born into a Sikh family. The family had been Sikh since the time of Guru Ram Das. Bhai Sati Das was Bhai Sahib’s brother. Bhai Mati Das accompanied Guru Tegh Bahadur in his travels to Assam, Bengal and Bihar. When Guru Sahib was arrested and brought to Delhi, Bhai Mati Das was also brought with him. When offered the choice to forsake the Sikh faith and become a Muslim or to face death, Bhai Mati Das happily accepted the latter and only asked that he die while facing the Guru. Even when Bhai Sahib’s body had been cut in two, Japji Sahib could be heard from both halves. 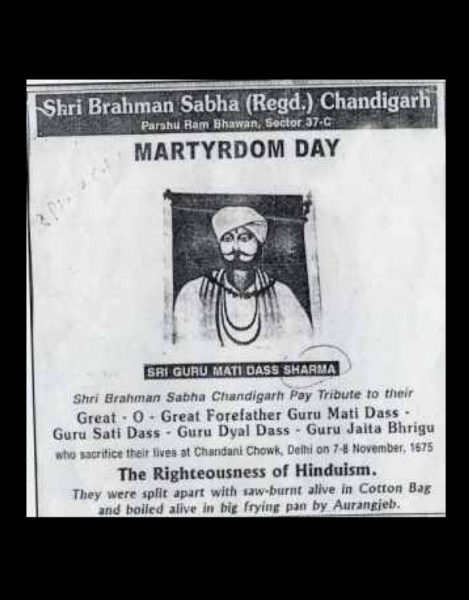 Bhai Sati Das was also offered the choice to forsake Sikhi or death, and  he accepted death. He was wrapped in cotton and burnt alive. (Source: Sikhiwiki.org)

The Hindu fundamentalist organization, in an effort to demean Guru Tegh Bahadar’s Shaheedee, have appropriated Bhai Mati Das and Bhai Sati Das as Hindu heros. Yearly events are held by its various wings to commemorate their martyrdoms but they are presented as Hindus who died for their faith. Many years ago, a Hindu organization published an advertisement terming Bhai Mati Das as “Mati Das Sharma”.

It also presents the martyrdom of ninth Guru Sahib in the wrong perspective and links it to the “national integration” of India.

Similarly, the organization which controlled the Union Government, had attempted to present Baba Banda Singh Bahahr as “Banda Bairagi” (i.e. a Hindu warrior).  Their sole aim is to present Sikhs as part of Hindus.

Recently, the RSS-BJP government stopped the Sikhs from going to Nankana Sahib in Pakistan to observe centenary of Saka Nankana Sahib.

So, the Sikh organizations and scholars must closely watch what is being done by the government to celebrate 400th Parkash Gurpurb.