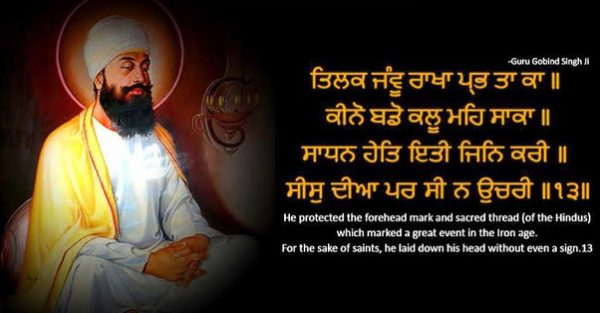 He made this request to the Indian Prime Minister Narendra Modi while participating in a meeting held on Thursday (April 8) to finalize the year-long events to commemorate the 400th anniversary of the Guru Sahib.

“National Integration” is an essential part of the school of thought founded by the RSS. This concept is being promoted by this fascist body ruling over India through its political wing, BJP. It aims to execute the mission of cultural assimilation in the Indian sub-continent. This agenda is fatal for the distinct identities of various ethnic groups, including Sikhs.

Sukhbir is committing this blunder despite claiming that the party headed by him is the sole representative party of the Sikhs in politics and works to safeguard their interests.  This is nothing but a clear endorsement of the RSS ideology. Ironically, the SAD (Badal) leaders, especially its honchos, have not stopped contributing to this fascist ideology even after snapping ties with its political wing in September last year over three draconian farm laws.

The RSS and Congress governments have also persecuted the Sikhs, who are a minority religious and ethnic group in the sub-continent, on the pretext of protecting “national integration”. In the 1990s, the Indian army during Congress rule attacked Sikhs’ holiest shrine, Sri Harmandar Sahib, in the name of unity and integrity of India, even as the Sikhs killed by the army were only demanding their right to be treated as first-class citizens like Hindus and implementation of federal structure. India has a history of persecuting the minorities in the name of unity and integrity. The RSS has been using Ninth Guru Sahib’s name for the propagation of its ideology of “national integration”, aimed at making India a ‘Hindu Rashtra’.

Sukhbir has also demanded the establishment of a world-class museum on the life and teachings of Guru Sahib. He himself does not know Guru Sahib’s ideology and links it to “National Integration”, how will he ensure that the museum’s depiction will be under the Sikh ideology?

A few years ago, Punjabi University Patiala founded Sri Guru Teg Bahadar National Integration Chair. The chair’s practices have remained dubious, and its founder head was an alleged close associate of the RSS. This chair has been promoting “nationalistic” feelings.

He does not know the meaning of secularism that is “the principle of separation of the state from religious institutions.” So, he misinterpreted the deeds done by the Guru Sahib for humanity.  Secondly, secularism is another dangerous tool used by the Indian state to carry out genocide of the minorities. Whenever any minority demands its rights, the majority makes hue and cry that ‘secularism is in danger’.

In a way, by making such statements, the chief of the “sole representative political party of the Sikhs” makes the job easy for the RSS and other nationalist forces that want dominance of the majority over minorities.

On the other hand, the Shiromani Gurdwara Parbandhak Committee (SGPC) is moving in the right direction, and it has linked the sacrifice of Guru Sahib to human rights. Truly, Guru Sahib made the supreme sacrifice for the community’s human rights (Hindus) being persecuted during Mughal rule in the sub-continent, not for the “national integration” as projected by the Badal Dal chief.