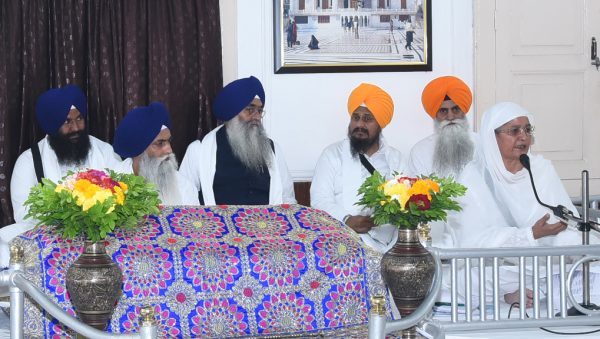 “India is a multi-religious, multilingual and multi-ethnic country. Its beauty lies in treating followers of all the faiths equally by the constitution. This is a fact that every religion has made a great contribution to its freedom, especially the Sikh nation, which has set an example by making more than 80% sacrifices for the libration. But it is sorry to say that, for a long span of time, religious freedom of other religions is being suppressed amid RSS agenda of making the country a Hindu Rashtra. Minorities are being threatened and scared secretly and directly with an act of interfering into their faiths. Such attempt was made in 17th century by Mughal empire, that was strongly opposed by Guru Sahiban, especially ninth Sikh Guru Sri Guru Teg Bahadar Sahib set an unique example  in the history of religions by making sacrifice to stop assaults on the Hindu religion.

Today’s general session of the Shiromani Gurdwara Parbandhak Committee (SGPC), Sri Amritsar, cautions  the Government of India (GOI) that instead of being keen to implement this agenda of RSS in India, the government must ensure that such organizations keep themselves within the limit of their faiths and speak accordingly. The Government of India must not associate itself with a particular religion and respect sentiments of the people of every religion. The elements which attempt to suppress the minorities, must be contained, so that religious rights of the followers of all the religions are secured”.

Several other important resolutions related to Sikh concerns were also passed on Tuesday.

A resolution demanded from the Government of India (GOI) to establish a unique monument of the ninth Guru on the lines of ‘Virasat-e-Khalsa’ at Sri Anandpur Sahib dedicated to his 400th birth anniversary and large scale development should be done of all the historic sites related to him from his birthplace Gurdwara Guru Ke Mahal, Sri Amritsar to his martyrdom shrine Gurdwara Sis Ganj Sahib, Delhi.

“The day of martyrdom of the ninth Guru should be celebrated as ‘Religious Tolerance Day’ and the GOI should make the holy baani (Gurbani writings) of the ninth Guru available in libraries all over the world by translating them into major languages of the world. All these works should be done under the supervision of the SGPC. The GOI and the state governments should declare SGPC as the nodal body for the fourth birth centenary celebrations of the ninth Guru, to be held at home and abroad. Apart from this, the road from Agra, the place of arrest of the ninth Guru, to his martyrdom site at Delhi, should be declared as ‘Sri Guru Tegh Bahadur Sahib Marg’ and from Delhi to Sri Anandpur Sahib as ‘Sri Guru Teg Bahadar Sahib Sis Marg’, as his holy ‘Sis’ was carried on this route after the martyrdom”, the resolution elaborated.

A resolution condemning the anti-farmer black laws framed by the GOI has been passed and their repeal is demanded. It reads, “The agriculture could not be ignored in the country, as the farmer feeds the country and the world by producing food grains after great difficulties. The black laws passed by the Centre government are going to ruin the farmers, so they should be withdrawn immediately.” The resolution also pledged to stand with all sections, including the farmers, who are struggling against the black laws.

Another resolution in this regard strongly condemned the killing of a youth (Navreet Singh) by cops during the tractor march held by the farmers in Delhi on January 26, 2021 and the torture and imprisonment of hundreds of them. Demanding an impartial inquiry into the matter, the farmers and youths lodged in jails were asked to be released immediately and all cases against them should be withdrawn. The resolution also sought to provide adequate compensation to the victims and an inquiry into the alleged role of government agencies in these incidents.

A resolution commended the Sikh organizations for helping the needy during the times of Covid-19 pandemic.

In another resolution, it has been demanded to hand over Gurdwara Gyan Godri, Haridwar (Uttaranchal), Gurdwara Dangmar and Chungthang (Sikkim), Gurdwara Bauli Matth, Mangu Matth and Punjabi Matth (Orissa), to the SGPC. It reads that these are the most sacred places of the Sikhs, but their issues have been pending for a long time. The resolution demanded that the responsibility of maintenance of these shrines be handed over to the SGPC.