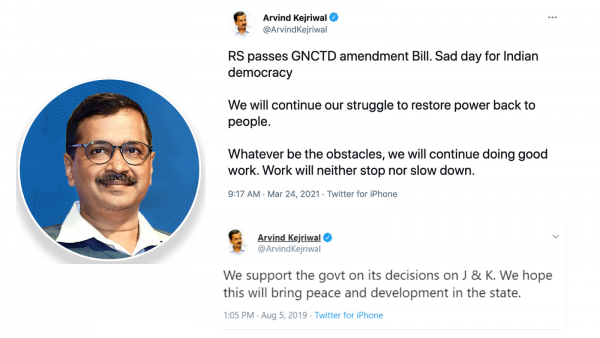 There is something similar between the Delhi Chief Minister Arvind Kejriwal and the Shiromani Akali Dal (Badal) inviting jibes for both these days.

As the Lok Sabha, the lower house of the Indian Parliament, passed the Government of National Capital Territory of Delhi (Amendment) Bill 2021, India’s civil society started mocking the Delhi Chief Minister for his dual standards on the violation of federalism by the BJP-led union government of India. Notably, Kejriwal is opposed to the Bill related to Delhi; however, he supported the BJP when it took over the powers from Jammu & Kashmir.

In 2019, India’s BJP led union government had launched a big and historic attack by abrogating Article 370 that gave Jammu and Kashmir autonomy in 2019 and scrapped it by declaring it a union territory. At that time, Kejriwal supported the action of the government of India.

Kejriwal tweeted, “Passage of GNCTD Amendment Bill in Lok Sabha today is an insult to the people of Delhi. The Bill effectively takes away powers from those who were voted by people and gives powers to run Delhi to those who lost the polls. BJP has cheated the people.”

Soon after his tweet, Kashmiris reacted in large numbers reminding him what he said when Article 370 was abrogated by the BJP government on August 5, 2019, amid military siege, communication blackout, and arrest of nearly 8,000 people, including three former Chief Ministers of Jammu and Kashmir.

Notably, the SAD (Badal) had also supported what the union government had done with Jammu and Kashmir. It had done so despite having a glorious history of making several sacrifices for the protection of federalism in India since 1947.

As following the footprints of Kejriwal, the SAD (B) has opposed the fresh move, and it is also facing similar jibes.

The Akali Dal has also termed the bill’s passage as a violation of the fundamentals of federalism as enshrined in the constitution and committed itself to work alongside all like-minded parties to restore the original Act.

In a statement here, SAD (B) MP Balwinder Singh Bhundur said the bill’s passing was also a fraud with the constitution and that the development did not augur well for the future. He said this could lead to more far-reaching changes, which could cause widespread disruption. “Federalism is the key for a healthy democracy in a diverse country like ours, and our constitution-makers understood this. The passage of the amendment Bill is truly a sad day for democracy”, he said.

Bhundur said the new Act, which had come into force now, had severely curtailed an elected government’s powers by putting it under the thumb of a selected appointee of the union government. He said the Delhi government and its assembly had been made redundant by the passage of the new Act as it specially specified that the Lt Governor’s opinion would have to be obtained before taking an executive decision. “This will negate the ideals of representative governance and democracy,” he added.

The SAD MP said the party had opposed the amendment Bill as a matter of principle and announced that it was ready to team up with other like-minded parties to defeat it in the Rajya Sabha, where the numbers between the treasury benches and the opposition were more evenly matched. “The SAD has been fighting for more powers to the States since 1972. In recent times we are witnessing the frittering away of the States’ powers on one pretext or another”, he said.

Pertinently, Bhundar also mentioned abrogation of the status to Jammu and Kashmir in the statement.

He said the very fact that the National Capital Territory Bill had come on the heels of abolition of the Jammu and Kashmir State assembly and introduction of three Agricultural laws which seek to do away with assured government purchase of food grains had perturbed citizens across the country.

“Now the draft electricity bill which seeks to centralize all power decisions besides seeking to take away the power of State electricity utilities is also in the offing. We will fight all such steps which seek to weaken the powers of the State”, the Akali MP added.