NEW DELHI, India—Arrested youth farmer Ranjit Singh has been released from the Tihar jail after being granted bail in an FIR registered against him in the Alipur police station of Delhi. Scores of eminent Sikh personalities, including DSGMC president Manjinder Singh Sirsa received him outside the Tihar jail. 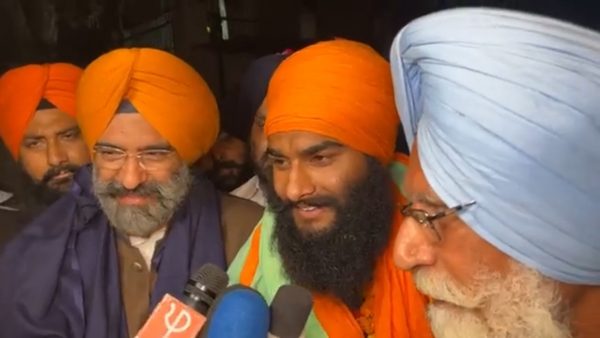 Ranjit Singh received a warm welcome after coming out of jail. The Sikh sangat present on the spot showered flower petals on him while he seemed in high morale despite facing ruthless torture by the Delhi police cops. He was repeatedly observed raising the Sikh ovation “Bole So Nihal Sat Sri Akal” with full enthusiasm.

Interacting with the media on this occasion, Ranjit Singh said that he spent his time in the jail while enchanting the name of the Almighty Lord.

On being questioned about the torture, Ranjit Singh replied that the Delhi police cops committed immense torture on him during the first three or four, but later everything turned normal in the jail.

“They kept on torturing me but couldn’t make me scream,” said Ranjit Singh while adding that he faced torture while enchanting the name of Waheguru.

Ranjit Singh was taken into custody by the Delhi police for coming forward in defense of protesting women farmers when a mob of BJP goons launched an attack on them. According to the eyewitnesses, Delhi police cops provided cover to these BJP goons for attacking farmers at the Singhu border.

The Delhi police cops had ruthlessly thrashed Ranjit Singh publically, and later, he was charged with an attempt to murder and several other charges of IPC.

Scores of youth farmers, who have been released recently, had also disclosed that Ranjit Singh was brutally tortured by the cops in remand, due to which he had turned unconscious.