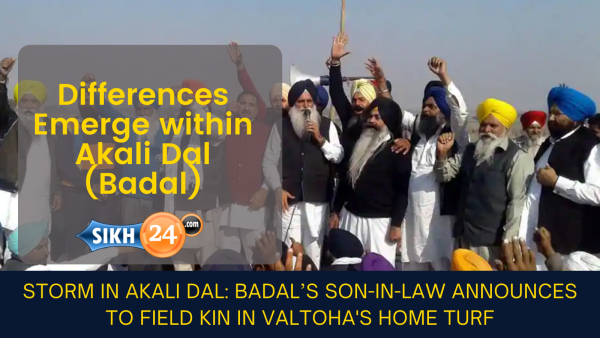 The Shiromani Akali Dal (Badal) is witnessing a storm within it, especially in the Majha region. Its patriarch, Parkash Badal’s son-in-law Adesh Partap Singh Kairon, and the party’s prominent leader Virsa Singh Valtoha have indulged in an unexpected tussle contesting upcoming assembly elections from the Khemkaran segment.

Khemkaran is the home turf of Valtoha, from where he has been elected an MLA twice. Though he faced a debacle in the last 2017 assembly elections, he gradually regained his lost base by working there tirelessly. However, in an unexpected move, the grandson of the chief minister of United Punjab Partap Singh Kairon has started conducting meetings in this constituency, challenging his party colleague, who is also the party’s spokesman and considered as a strong leader of the party.

Kairon has been MLA from adjoining constituency Patti four times, and he lost to Congress’ Harminder Singh Gill in the last assembly elections.

He also addressed public meetings at Sursingh village on Wednesday. “Voters of Khemkaran want me to take over reins of the Khemkaran segment too. So, I could not ignore their request as people of this constituency are attached to my family emotionally. I could not leave them”.

This announcement has left Valtoha red-faced. Even as Kairon is the son-in-law of Badal, whose family still controls the party, Valtoha turned blunt against him after seeing his activities in his stronghold. “The Akali Dal is not the party of his father. He has been using his relations with Badal senior to remain in the assembly and cabinet. But in actuality, he has never been loyal to the party for which other Akalis and we have made sacrifices so far. Actually, he has already lost ground in Patti, so he is willing to come to my segment. As he has lost his base in Patti, I will start my activities there as well”, he added.

He informed that the party would organize a rally at Amarkot village in the Khemkaran segment, and the party president Sukhbir Badal would address it. Valtoha said Kairon and his family members could fight the election from Khemkaran, but not on Akali Dal’s ticket.

It is worth mentioning that Sukhbir’s brother-in-law Bikram Singh Majithia has been sharing cold vibes with Kairon for a long time, and Valtoha enjoys the support of Majithia. The sources said Kairon’s tuning with his brother-in-law Sukhbir is also not well.