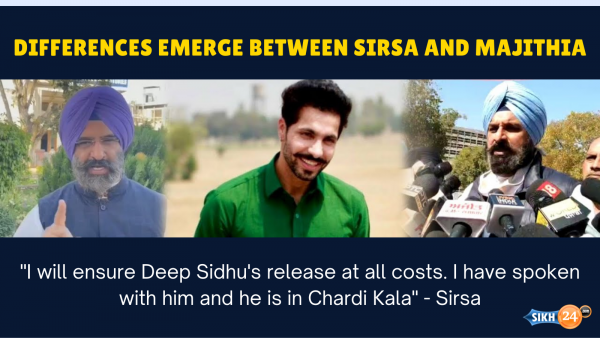 While Sirsa, on behalf of the DSGMC, has extended support to Sidhu and stated that they would ensure his release at the earliest, Majithia has opposed him, stating that the SAD (B) would not support such a person who tried to sabotage the farmers’ tractor parade taken out at Delhi on January 26.

On his Facebook page, the DSGMC president said, “Many people have called me to ask about Deep Sidhu. I wish to update you all that I had a telephonic talk with him the day he was remanded. He is perfectly fine, health-wise. I have assured him that DSGMC will provide all legal assistance and ensure that he is out of jail soon”.

Sirsa is also a senior leader of the SAD (Badal) and very close to its president Sukhbir Badal.

When asked to clear his stand on Deep Sidhu, Majithia said, “I am not fully aware of what has been said by Sirsa in this regard, but I would like to make it clear that the party will not support any such person who tried to sabotage the farmers’ stir on the direction of the BJP.”

He was interacting with the media today outside Punjab legislative assembly when media persons asked him this question making him almost speechless. However, he did not name Deep Sidhu, despite the newsmen questioning him repeatedly.

Sidhu, who, along with other Punjab youths, hoisted ‘Nishan Sahib’ (Sikh flag) atop Red Fort at Delhi, was arrested by the Police after announcing a reward of Rs. 1 Lakh for giving information about him. The Police projected him ‘villain’ of “violence” and “anti-national” activities. The Police stated that he (Sidhu) instigated the mob to indulge in violence. Now, Sidhu is in Tihar Jail.

p style=”font-weight: 400;”>Though the stand taken by Sirsa in support of Sidhu is surprising for all but is being hailed all over the world by the Punjabi Sikh community. Besides, the lawyers’ panel constituted by the DSGMC to pursue cases of those arrested by the Delhi Police has made many farmers released. Sukhbir is silent over this issue yet.