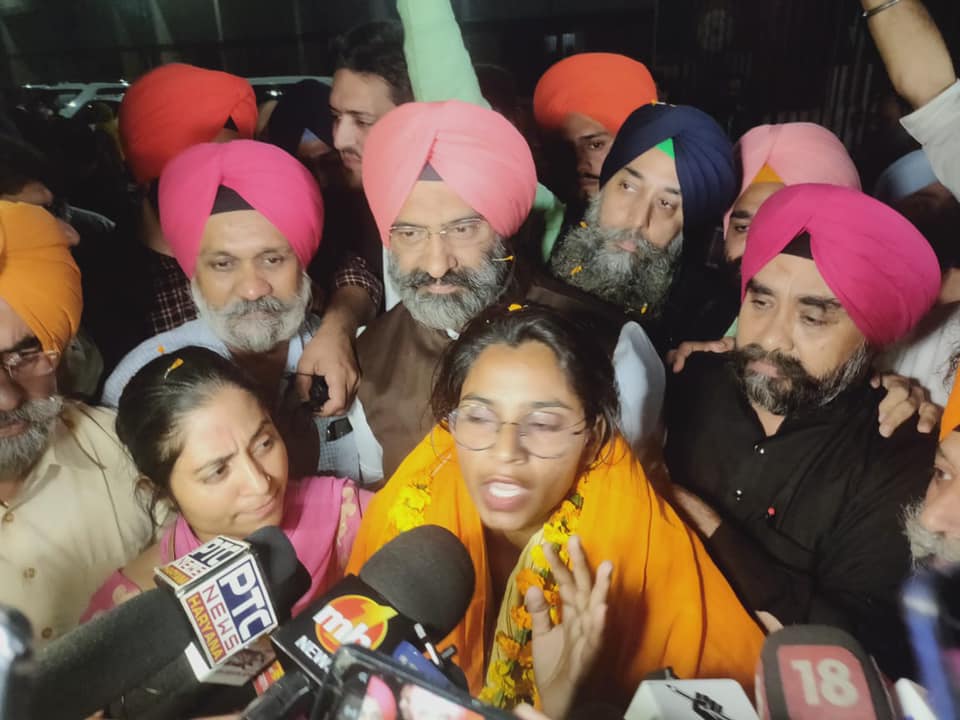 A day after being released from Karnal Jail in the case registered against her under various sections, laborers’ and women’s rights activist Nodeep Kaur today addressed the agitating farmers from the main stage of Delhi’s Singhu border from where she was arrested in January this year.

Even as the Police torture she suffered from during his custody, no sign of fear or nervousness was seen on her face when she addressed the gathering of the farmers and other people supporting them. She again criticized the BJP-led union government of India for its anti-people tactics.

She said, “This is not a farmer agitation; this is the agitation by farmers, labourers, and common people. Everyone who is living a miserable and painful life is participating in this movement. This is the movement by those who are being victimized by the government policies and its black laws”.

“The government must repeal the agri laws as the common person has woken up now. Truth always turns victorious. Circumstances of this country are vulnerable for the women, labourers, and farmers. The labourers don’t get proper wages at present. If they take on roads for their basic rights, they are called “terrorists”, “Naxalites” and “Khalistanis”. However, we know who we are. And we also know Bhagat Singh was once called “terrorist,” but today he is our hero”, she asserted.

She further said, “We are the people who are creating history, and our next generations will remember us for the struggle we are fighting for them. We will keep fighting till the laws are revoked. This movement will continue till the gap between rich and poor is not filled”.

“When I was arrested, the Police thrashed me mercilessly and ruthlessly. They hit me sitting on my body. Castist remarks passed on toward me because I belong to a Dalit family and my parents are labourers. Farmers and labourers are both brothers of each other. They will maintain their unity. Those who want to create a rift among them should come to see unity at the protest site”, said Kaur.

The rights activist said, “After being released from the jail, I have learned that my colleague Shiv Kumar who was also arrested, was tortured by the Police. Police broke his legs and removed his nails. His condition is severe now, but the Police are not allowing his kin and lawyers to meet him citing Covid-19 outbreak”.

“In a nutshell, I would say that our system has deteriorated so much that there is no respect for a person who supports the truth. Nobody will raise for the victimized people, and we will have to become ourselves our voice. The laws enacted by the Union Government are meant for the capitalists and corporate companies”, she added.

A member of the Mazdoor Adhikar Sangathan who had joined the farmers’ stir, Kaur drew international attention when Meena Harris, an American lawyer, author, and niece of US Vice-President Kamala Harris, said in a Tweet, “Weird to see a photo of yourself burned by an extremist mob but imagine what they would do if we lived in India. I’ll tell you—23 yo labor rights activist Nodeep Kaur was arrested, tortured & sexually assaulted in police custody. She’s been detained without bail for over 20 days”.

On January 12th, the Haryana Police barged into the Majdoor Adhikar Sanghatan (MAS) tent erected in solidarity with the protesting farmers and peasants at the Singhu Border. They arrested a 24-year-old Dalit woman, a worker, and trade union activist Nodeep Kaur. The police then took her to the Kundli police station, where two different FIRs were filed against her, FIR 25/2021 and 26/202