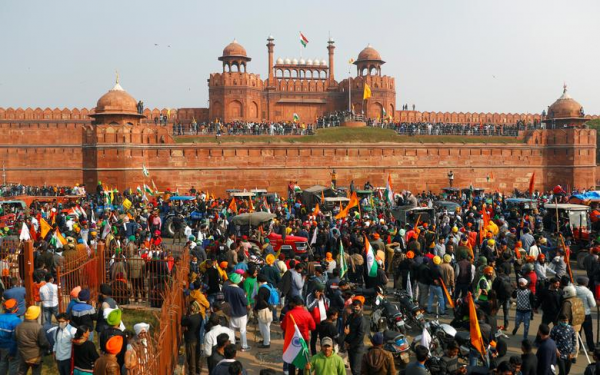 The World’s largest protest is ongoing in India against the new agricultural laws, despite the dictatorship tactics of the Indian Govt. Such tactics escalated after the events of Jan 26th. Although, the pro-Modi media (godi media) got its opportunity to further the narrative, ”protesters as separatist groups (Khalistanis)”, which is not true. On Jan 26th (Republic day of India),  The Union of farmers (Sanyukt Kisan Morcha) called for a ”Tractor-Parade”, a part of which turned violent. With every day passing, more and more questions are being raised by freelance journalists and alternate media houses, proving the violent activities as a pre-planned set up to fail for the protesters.

A first-hand account of a U.S. doctor explaining what he experienced on Jan 26 can be seen at this Instagram link. Despite being brutally beaten by people dressed as Police, Dr. Swaiman Singh continued his job as a doctor. He recalls and unfolds the events explaining how the people were confused by the barricades set up to lead to Red Fort. Groups of people entered into a crowd of over 20k dressed as Police and protesters to agitate against each other. More of such videos and reports are coming forward, and thus Govt. can be questioned on the grounds of failure of intelligence in protecting Red Fort on Republic Day. Since Jan 26, the protesters have faced various attack incidents, despite Supreme Court orders, to allow protesters to claim their democratic right of expressing dissent. One such incident was on Jan 29, 2021, when there was stone-pelting on peaceful protesters, allegedly by a group of 100-150 BJP-RSS workers, while Police were standing by right there, nearly 4000 – 5000 in numbers, doing nothing to stop this group. Instead, they started firing tear gas on protesters. This was reported live on Punjabi media and some other media channels.

A freelance journalist Mandeep Punia was arrested by Police; as in one of his reports, he uncovers the role of Delhi Police in helping the alleged RSS and BJP, both on and after Jan 26. In one of his LIVE on a social media account, he unveils the Delhi Police’s role in helping the people who were attacking the protesters. Mandeep further adds that, on Jan 26, if farmers would have gone to the route given by Delhi Police, in Bawana village, there were goons of BJP with petrol bombs to attack the farmers driving tractors, which would have resulted in a massive loss of lives. In the same video, he requests human rights activists/lawyers to document all the arrests on and after Jan 26. The video can be seen here.

Notably, over 200 farmers protesters are missing, 163 arrests, an official figure given by Darshan Pal Singh (one of Farmers Union leader) in a press conference on Jan 31.

On Feb 1, Mandeep got released on bail and appeared on independent media channels known for actively questioning Govt. He gives out the account of his arrest on Jan 29 in various interviews. He says Delhi Police beat him up before and during the time he was taken into custody. He was taken into Tihar jail, where he got the opportunity to bring out stories of protesters locked near his cell. In his interview, he says, every protester was brutally beaten up, and no one knew the charges they were being locked up for.  Mandeep took notes by writing on one of his legs as a symbolic protest, which Police specifically beat before they took him to custody. One of the stories Mandeep mentions is of Baba Jeet Singh, a 70-year-old man (working as a Sikh Priest), who went to “Burarhi ground” (a place designated by Govt. for the protesters on Nov 27, 2020) to serve “Langar” free food. (Source: Mandeep’s interview on NewsLaundry)

Another relatable incident is Nodeep Kaur’s arrest on Jan 12, 2021, who worked as labor-rights activists for United-Sikhs, a US-based organization. According to family sources, she was tortured and sexually assaulted (Source: dailysikhupdates.com). #ReleaseNodeepKaur is trending on Twitter for her release. Meena Harris, a 36-year old lawyer and niece of Vice-President Kamala Harris was trolled, and her posters were burnt when raising her voice on this issue.

While journalists are protesting against the Police and Govt., on trying to suppress free speech, the pro-free speech giants like Twitter (India) and FB have shut down official pages of Farmers Protests on Feb 1, 2021. However, most of the 250 shutdown accounts were restored on Feb 2, 2021, by Twitter. #TwitterCensorship remained at the top trending for Twitter’s shut down of accounts voicing farmers’ protests. Twitter has actively engaged in shutting down user accounts, on and off of people expressing for farmers’ protests, but it had failed to do so when it came to acting against BJP’s (ruling party’s) IT cell. Well, for the first time, Twitter did that in the last ten years but could only flag it as “manipulated media.” No shut down of any accounts.

There’s no denying that many Delhi Police personnel faced injuries on the Tractor Parade held on Jan 26. Various reports claim different numbers, the most being 394 in a report published on Feb 1, 2021, in The Tribune India. But it is very much required to debunk the continual efforts of the Govt., and mainstream (majorly in Hindi, India’s national language) media on creating a separatist, “Khalistani” narrative, and targeting Sikh Punjabi farmers, and the state of Punjab, since the beginning of the protests in Delhi. Further, countless stories like Nodeep, Jeet, and Mandeep are not reported in the mainstream media, backed by corporate houses. Additionally, no questions were raised on security intelligence failure on what led to Red Fort’s events.

News Laundry (a media house known for an ad-free business model) mentioned, in one of its podcasts (published on Jan 30, 2021), that, while 80,000 tractors paraded on the given route by the Govt with 200k – 250k farmers, even received showering flowers by locals of Delhi, but, Hindi speaking pro-Modi Govt. media focus was just on the Red Fort where there were only 300-400 tractors. Further, the incident was reported wrong, as the flag hoisted on Red Fort was the Sikh religious flag and Farmers Union Flag, not the “Khalistani” flag. Further, it was hoisted on an empty pole, and Indian National Flag wasn’t insulted, as reported in the pro-Modi Govt. media. Although, that was pretty evident and mentioned in alternate media channels. The link to the podcast is here.

As discussed in the podcast, cases of journalists, comedians, or anyone raising issues, or expressing dissent (which gives a bad image to the role of Govt.), have become common under the rule of Modi Govt. Further, narrowing down minorities, like Muslims, or Sikhs, have become part of a governing design to give voice to the Hindu-nationalist ideology of the Govt. Here’s a link to a report published in Hindustan Times in 2018, claiming India to be the third most dangerous country for journalists in the world after Iraq and Syria.

Now, with Govt. fortifying the borders of Delhi by building walls around city’s borders, putting nails on the road, setting up fences along the perimeter of protesting sites specifically trying to isolate a group of Sikh farmers from others. Internet and social media became the only lifeline of the people with such circumstances, facing an organized effort to fail them by Govt., Police, pro-Govt. Media and violent incidents organized by right-wing extreme groups like RSS.

And thus, the shutdown of the Internet was the next step. When questioned in a tweet by U.S. popstar Rihana, climate activist Greta Thunberg, following many other Global influencers, Indian Foreign Ministry, Bollywood celebrities, Cricketers, sided with the Govt., calling the tweets “propaganda” to interfere in internal matters. The same Bollywood, who once tweeted “Black Lives Matter” during George Floyd’s case in the U.S., now can be seen against millions of farmers protesting across the country against the new agricultural laws.

It’s worth mentioning here that India leads in Internet shutdown, despite having the second-highest number of Internet users in the world, according to Top10VPN, U.K.-based digital privacy and security research group.

Whether Govt. pressure or belief in the State-sponsored ideology led to similar tweets by Bollywood is a question only celebs can answer. As usual, “Godi media” started its outcry in giving voice to the Foreign Ministry’s propaganda narratives.

Although it’s deplorable, trying to measure the extents; the level to which “Godi media” can stoop down to can be assessed from the gangrape case, “Hathras,” where media tried to prove it as a conspiracy rather than covering the factual story (story can be seen here). The heights of diverging narrative can be measured from the fact that people who have built their political careers on hideous past are now portrayed as the carriers of pro-Hindu religious and nationalist ideology.

“Hathras” gangrape case reveals the failure of the criminal justice system in providing justice and how it can be exploited using the systemic loopholes over and over again, by the authorities, with the media, Police, and marketing agencies joining hands to cover up the ground realities. When the justice itself fails to be just, it becomes easier for those in power to make misleading statements, despite having a career built upon criminal cases, hate speeches, or communal riots.

People expressing any form of dissent are arrested, independent news agencies are raided, songs giving voice to farmers are taken off from YouTube, social media platforms are censored, or accounts are shut down. New social experiments are created by the Govt. to turn people against people. During such dark times, celebrities holding positions of power/influence, excelling at a career to a level where a person is seen bigger than the game, were expected to show their artistic soul. But, in this case, certainly, they have failed to show even a hint of the human soul. On the one hand, the protests have gone over 76 days in harsh winter, adverse conditions with limited supplies (making it impossible to cross the watertight patrolling by paramilitary forces to pass water/food supplies and other toiletries) causing over 200 deaths. On the other hand, Bollywood celebs having platforms call it “propaganda,” and PM Modi has been able to call the protesters very casually “Andolan-jeevi/parjeevi” (Protesting-beings/parasites) in the Parliament on Feb 7, 2021.

Thus, the only hope left is to become united for humanity irrespective of differences like race, religion, culture, and geography. And to speak against such authoritarian government tactics. Otherwise, the future of a shackled nation is bleak and not worth considering.

“Staying silent in such a situation is helping the motives of the system.”