“A Youth Kisan rally is being organized for the release of the farmers arrested by Delhi Police at Maharaj Mandi, Bathinda, Punjab. There is no space left in 9-acre Maharaj Mandi.” – Mandeep Punia

Independent journalist Mandeep Punia, who was arrested from Singhu on January 30, today attended the Kisan Mazdoor Ekta Rally at Mehraj in Bathinda. The Delhi police detained had Punia after he was recording stories of farmers at the Singhu border.

Today, at the rally called by activist Lakha Sidhana, Mandeep Punia addressed the attendees and said the farmers locked at Tihar are in “chardi kala” (rising spirits). “Due to these farmers, slogans of the farmers’ protest are resounding in the chambers of the Tihar Jail,” Punia said while addressing the gathering.

Punia added that many of the detained farmers at the Tihar Jail did not know of their crimes or under what section of the IPC they were being detained.

At the rally, Punia quoted NDTV renowned journalist Ravish Kumar. “A journalist who is afraid results in a democracy that is dead.” He added that leaders who are dead are the cause of the people who live in constant fear. “I want to appeal to you today; do not be fooled by anyone who is saying the protest is dying. I have witnessed myself at the mandi grounds of Mehraj that there is not even space to lay your foot.”

Punjab and Haryana’s youth have united, and the Government will have to listen to their voice. They can no longer bar them by installing barricades. They must establish dialogue, he said.

Before his arrest, Mandeep Punia had exposed the nexus between the Delhi Police and BJP sponsored mob who committed violent actions against the farmers. He had challenged the police on how a group of 50-60 mobs could pelt stones at and set tents of farmers on fire in the presence of 4,000-5,000 police personnel at the site. 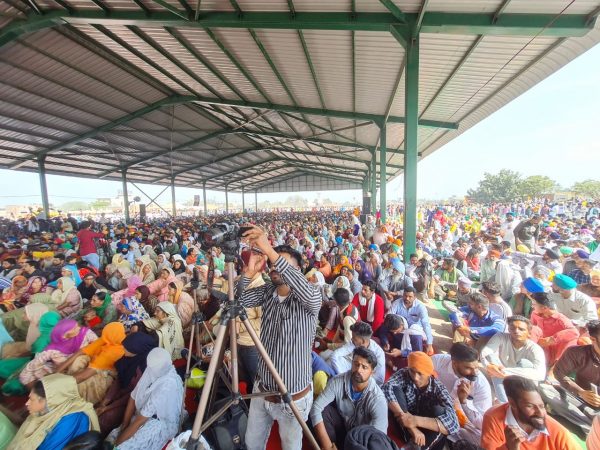