Well, for various reasons, but primarily due to her hateful and instigating comments on Twitter, she has been trying to remain in the limelight.

Although Kangana has been actively tweeting and instigating hate against the protesting farmers, Twitter recently took action and deleted three of her tweets. Twitter did this after a legal notice was served by Manjit Singh GK (a Delhi based Sikh leader), seeking deactivation of her account. 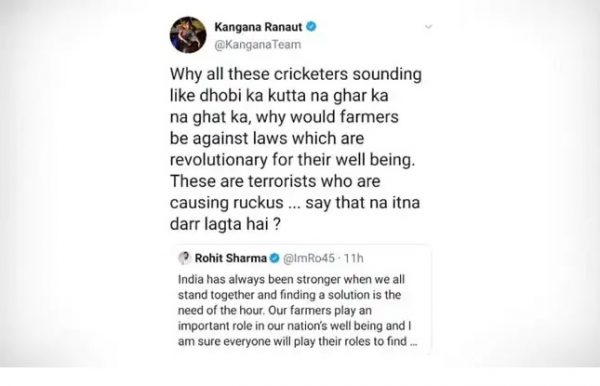 “We have taken action on Tweets that violated the Twitter Rules in line with our range of enforcement options,” said Twitter in a statement confirming the development.

No one is talking about it because they are not farmers they are terrorists who are trying to divide India, so that China can take over our vulnerable broken nation and make it a Chinese colony much like USA…
Sit down you fool, we are not selling our nation like you dummies. https://t.co/OIAD5Pa61a

However, Kangana’s most offensive tweet, which she dubbed protesting farmers as “terrorists,” is still active. Kangana had posted this tweet in reply to International pop star Rihanna’s pro-farmers tweet.

On February 3, the former DSGMC president Manjit Singh GK, who now heads a party named JAGO, had sent a legal notice to the Managing Director of Twitter seeking deactivation of her account.

Following the action by Twitter, Kangana threatened Twitter with a TikTok type ban in India if the social media platform continued to sensor her tweets. Twitter is not the only entity that has received threats from Kangana. She has been instigating hate towards anyone who has tweeted in favor of the farmers.