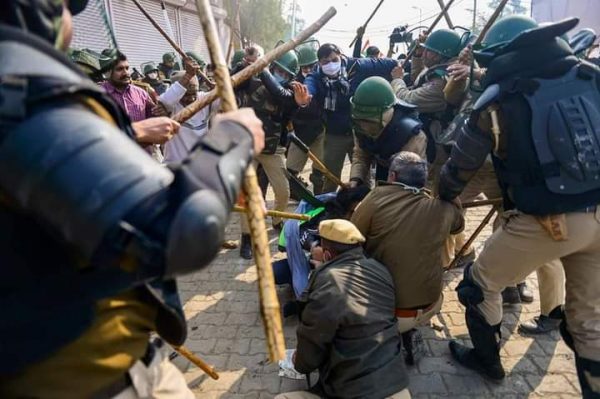 The World Sikh Organization of Canada has written to Foreign Affairs Minister Marc Garneau, calling on Canada to condemn the violent attacks on farmer protestors in India.  Over the past several days, protestors have encountered increased attacks and persecution by Indian authorities.

Along with farmers, a number of prominent journalists have been picked up by the police. Sikh24 has released names of 120 personnel who went missing during the tractor parade carried out on January 26 in New Delhi.

Following is the text of the letter sent to the Minister of Foreign Affairs by World Sikh Organization President Tejinder Singh Sidhu.

Minister of Foreign Affairs
House of Commons
Ottawa, ON
K1A 0A6

We are writing today to express our deep concern with respect to the rapidly deteriorating situation in India in light of the ongoing farmers’ protest.  Over the past several days, protestors have been attacked, journalists have been abducted and Indian authorities have shown a reckless disregard for basic democratic and human rights.

As you may be aware, for over two months farmers from Punjab and across India have gathered on the outskirts of Delhi in protest against agricultural reform laws enacted without consultation and due process by the ruling BJP government. Since January 26, the situation in Delhi has worsened and there are confirmed reports of protestors, journalists and activists being attacked, beaten, abducted and disappeared by security agencies.  Protest sites have also been attacked by right-wing Hindutva mobs as police either actively participated or looked the other way.  Internet service around the protest sites has been suspended so as to prevent protestors from sharing their brutal treatment with the rest of the world.

Dozens of peaceful protestors have been abducted by the police and falsely charged.  Although approximately 40 protestors have been traced, dozens more remain unaccounted for.  In a particularly shocking move, Mandeep Punia, a regular freelance contributor to The Caravan magazine was abducted by the police while he reported on the protests.  Just a day earlier, Punia revealed that many members of the mob that attacked the protest site were members of the ruling BJP party.

As India’s government sinks towards authoritarianism and violates the basic human rights of the protesting farmers, we request that you condemn the recent attacks on protestors and call on India to respect basic democratic values and the right to peaceful protest.  As Canada’s Sikhs continue to watch the situation in India with horror, we are hopeful that Canada will live up to its reputation as a human rights leader and encourage India to engage with the protesters in dialogue.  The use of state violence to silence protest and dissent must not be tolerated.