A petition to the UK Parliament asking it to ensure Indian farmers and press safety has officially crossed over 10,000 signatures, which means that within a day, the UK Government must provide an official response. If the petition manages to gather 100,000 signatures, a debate will be held within the parliament.

The petition is currently close to having 60,000 signatures. It can be signed at this link.

Several UK MPs have also called upon the UK Prime Minister to condemn the state brutalities by the Modi Government in India against the protesting farmers seeking repeal of 3 farm laws. 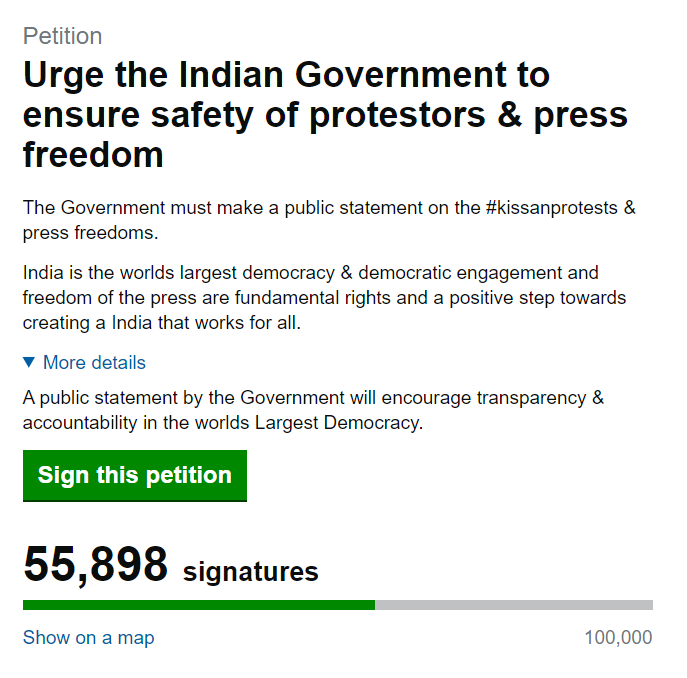 UK Prime Minister Boris Johnson was set to participate in India’s January 26 Republic Day celebrations; however, he backed out due to COVID-19 concerns. Prominent farm union leader Balbir Singh Rajewal however, cited that no world leader is willing to visit India due to its draconian policies and massive protests by farmers against the unconstitutional laws.

Labour MP Pat McFadden said, “This is not just a distant story. Scenes of violence against farmer protests In India are causing huge distress among many people in the UK who have family roots there. There is a strong sense of solidarity with the farmers.”

Another Labour party MP Tan Dhesi had sent a letter earlier to the UK Prime Minister Boris Johnson, signed by over 100 MPs and Lords, to apprise him of the farmers’ protest. He had appealed to the UK Prime Minister to ensure the safety of protesting farmers. Tan Dhesi again iterated that if the Indian Government cracks down on the protestors, it will make their movement stronger.