Delhi Police has detained Mandeep Punia of Caravan Magazine and Dharmendra Singh of Online News India. Both of them have been detained from the Singhu Border and have been detained at Alipur Police Station. However, police have denied all allegations.

Mandeep and Dharmendra were both picked up by the Delhi police in a ruthless manner. A video had surfaced online showing Mandeep being dragged over the Delhi police’s concrete barricades just moments before he was taken into custody.

The arrests took place around 7:30 PM IST. According to eyewitnesses, police arrested the journalists when they were recording a video of a mob trying to break into the Singhu encampment of the protesting farmers.

Locals have said that Punia and Singh were taken to the Alipur police station; however, police have not given any confirmation.

Punia is a freelance journalist who contributes to the Caravan Magazine and Janpath, whereas Dharmendra writes for the Online News India platform. 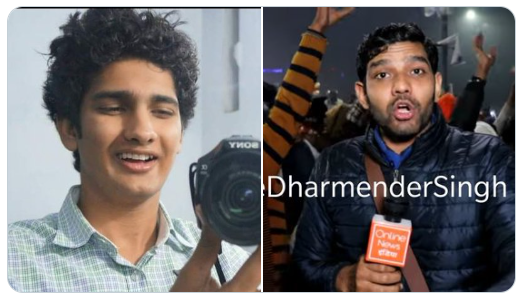 Dalip Mandal of the Editors Guild of India, while condemning the arrests, tweeted, “Voice of the voiceless Mandeep Punia must be released. The police have detained him for no valid reason.”

This is how Mandeep Punia, a journalist from Caravan was manhandled by Shah’s Delhi Police & detained.

What was his crime? Showing the truth about Farmers protest at Singhu Border?

Is India still a democracy or are we a Police State?

#MandeepPunia exposed the nexus of police & BJP workers. He identified many BJP workers among the stone pelting goons. He also explained the hackjobs of some media outlets. This is why he is detained. Let that sink in. #ReleaseMandeepPunia