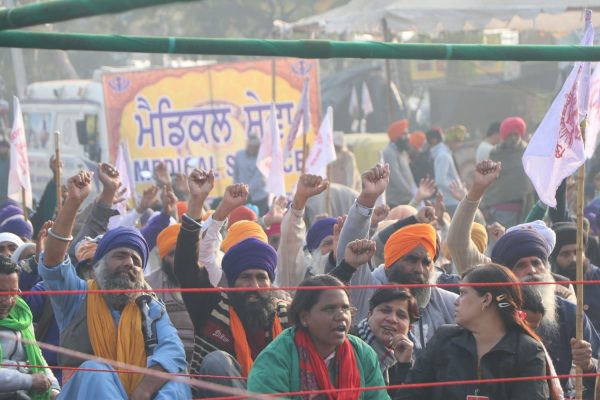 What we are witnessing in India, is the panicked BJP government desperate to change to the narrative of the Farmers Morcha.

They recognise that they are defeated in the debate of the farming laws dictated by corporations versus the farmer. This is why they are so desperate to manipulate events to change the narrative.

In India, the Prime Minister Modi is for rent by a handful of corporations. The world is waking up to this reality.

The regular internet blackouts on Morchas sites combined with yesterday’s internet blackout in the whole of Haryana in an acknowledgement that the BJP is unable to bully it narrative in this movement just like it wiped out previous movements against their policies in India.

No Sikh or Punjabi needs to be apologetic on raising a Nishaan Sahib at the Red fort, Delhi.  If any sincere Indian understood history, they would say the Nishan Sahib should be a permanently raised on the Red Fort to acknowledge the massive role of our Guru Sahibaans and Sikhs to overcome Moghul Rule.

Further if India is truly a secular country, then it should have flags on many communities there to recognise the diversity of this nation on the Red Fort. However this will not happen as BJPs dream of Hinditva is to eradicate these cultures, languages, religions and communities into the one centrally controlled Hindu Nation.

Punjabis need to careful not to get obsessed by personality politics of farmer leaders.  I request Sangat to realize this morcha has no solid abyassi leaders like Bhai Fauja Singh or Baba Jarnail Singh. Instead it’s got many flawed leaders, who will have their positive moments and others time they will have dark moments. It’s important to focus on the morcha, not on the flaws of each of the many leaders. The fact that there is not one leader has advantages and disadvantages. The advantage is there is not one person for the BJP to target, the disadvantage is multiple leaders have multiple viewpoints, flaws and this can create conflicting messages and ideologues. Focus of defeating the Ambanis, Adanis and Modi, not on the personalities of farmer leaders. The fact that this morcha is still going after everything BJP has thrown at it, is only due to Vaheguru kirpa.

What we as the global Sikh/Punjabi diaspora should do is highlight and openly say Modi is a Prime Minster for rent. Most importantly counter the narrative of the Godhi Media, highlight the human rights abuses, the discrimination, the collusion between Delhi Police and RSS goons, the incitement of BJP MLAs in targeted violence against Sikhs. However constantly bring the narrative back to the injustice of these farm laws and the super rich behind them.

In a normally functioning democracy the media hold the Government to account. However the BJP/RSS utilise the Godhi media and their favorite Bollywood celebrities to spread the narrative to target any community who speaks against their ethic cleansing agenda. These media channels and a specific Bollywood actress are no less a terrorist than the RSS goons who attack minorities. They should be called out as such.

When we, the global diaspora speak up, then BJP get even more rattled. They are so vain, that they cannot handle scrutiny and truth against scripted Ghodi media lies. It’s a time for the global Sikh/Punjabi diaspora to be more vocal on Modi, Ambani, Adani, Ghodi media and celebrity terrorism than ever before.  Call out the Prime Minister for rent and call out the celebrity terrorists for their real fascist agenda.

As a Sikh, we never speak with anger. We speak with Sehaj, but with truth and vigour.

Jagjit Singh is a UK based Sikh activist doing seva with over 15 Sikh organizations worldwide, including Khalsa Foundation, Share Charity and many others. He is in the World Sikh Parliament and prominent speaker in many Sikh initiatives and camps around the world. He is the author of Kurbani and the creator of the Sikh Parenting Course. He is the CEO of a Health care company and voice of positive empowerment. He has been doing daily updates on his social media since the farmer morcha went to Delhi.