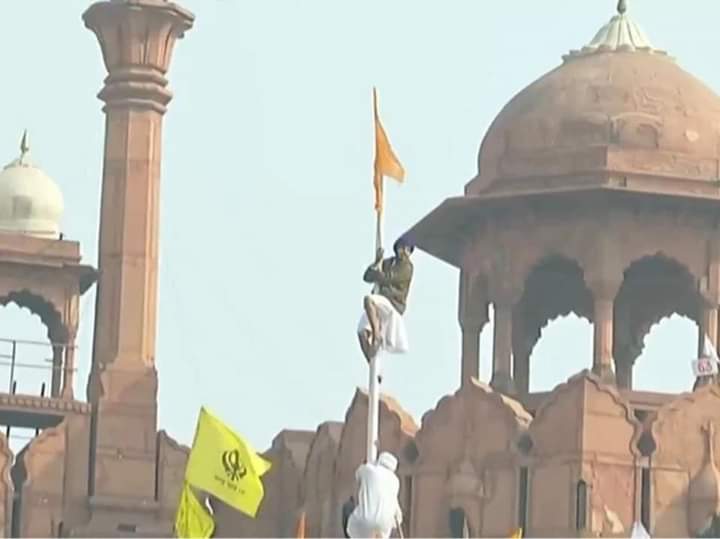 To lodge a symbolic protest on Republic Day of India and challenge the autocratic nature of the Indian state, Punjab’s youths taking part in the tractor march taken out in Delhi in protest against three contentious farm laws hoisted farm unions’ flags and Kesri Nishan Sahib (Khalsa flag) on historic Lal Qila (Red Fort) which was constructed during the regime of Mughal Emperor Shah Jahan and is conserved as a heritage building by the Indian government. However, Indian mainstream media, nationalist people, and Hindu extremists are making hue and cry over this act.

This act is being condemned even as the agitators did not harm or harass any human being or damage public or private property in India’s national capital. They hoisted both the flags but did not touch “Tiranga” (tricolour), the national flag of India, and remained intact. 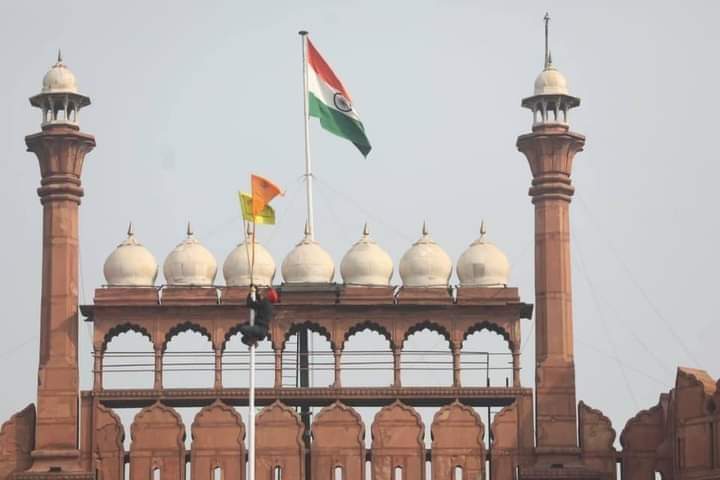 However, the Indian media and unofficial IT cell is spreading a big lie that the agitators have “insulted” the “national flag.” “The tricolor remains untouched and aloft at Red Fort…the Nishan Sahib flags did not replace the tricolor at any stage…more people waving the tricolor all over the Red Fort”, said famous Indian journalist Rajdeep Sardesai in a tweet.

The agitators are being projected as “anti-national,” “mischievous elements,” and “anti-social elements,” though few of them also carried “Tiranga”. The Indian TV channels are presenting this incident as an “attack” on the nation. They are not blaming the union government, which has led to such a situation by not bothering agitation that the farmers have been spearheading for the last six months since the central government issued the ordinances. 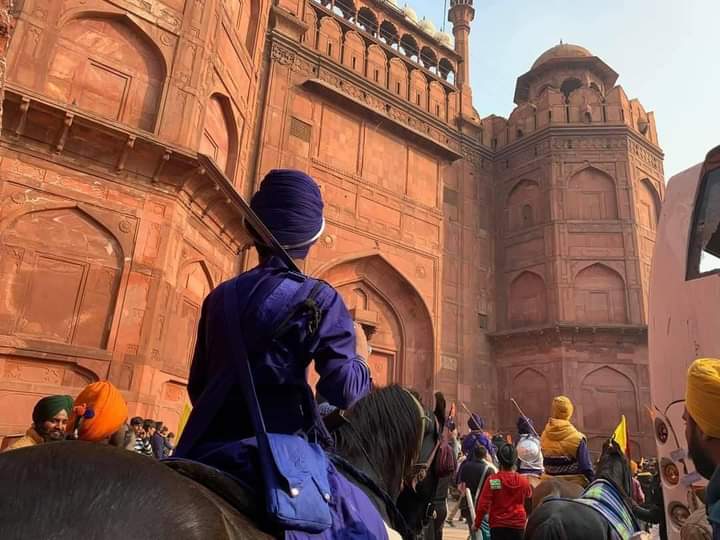 The Indian channels are also stating that the “Khalistani” flag was hoisted on the fort.

Though Sikhs are in majority among them, Hindus were also there accompanying them on the premises of the fort which is vicinity of Chandni Chowk, where ninth Guru, Sri Guru Teg Bahahader Jee were martyred by the Mughal rulers for raising voice in support of human rights of Hindus who were being persecuted at that time. The Hindutva elements and ultra-nationalist people are equating this act with “terror” activity.

A video has gone viral over social media. A Nihang Singh is seen taking a woman Police personnel to a safe place on the premises of the Red Fort which was occupied by the agitators for a few hours. This woman was stuck in the scuffle of the agitators and male cops.

Ironically, farmers’ unions except Majha based Kisan Mazdoor Sangharsh Committee (KMSC) are condemning this unusual act in the tone of the pro-establishment Indian media. He is also using this act to target actor turned activist Deep Sidhu who also carried a Nishan Sahib to the fort and termed him “traitor” without proof.

Interviews of the youngsters who hoisted the Khalsa flag and farmers’ flags, revealed the sacred intention behind their act. A youth told the newsman that he did ardas to hoist the fort, his ardasweren fulfilled by Guru. They had no intention of vitiating a peaceful atmosphere, nor did they.

Countering the propaganda, a young Punjabi thinker Gangveer Rathoure said, “If tableau of under construction Ram Temple can be displayed in the Republic Day parade, hoisting Kesri Nishan Sahib poses a challenge to Brahmanical authority in this country, not to the common man”.

“Protesting farmers hoisted their flag on an empty flagpole at the Red Fort. The Indian tricolor was not touched and flied on top of the fort. Every account, regardless of party affiliation, spreading rumours should be tracked and cases filed for fueling animosity thru disinformation”, said Saket Gokhle, transparency and investigator, in a tweet.

Following vilification against the farmers, pictures are going viral over social media, including one wherein Hindu fanatic groups are seen unfurling saffron flag on Rajasthan’s Udaipur court by the mob in support of man who killed a Muslim labourer Mohammad Afrazul in the name of “Love Jihad” in 2017. The mob also attacked the Police guarding the court.

Several photos are also being shared, wherein the BJP party flag is being hoisted above the party workers’ tricolor. And a photo is also viral in which a tricolour on the dome of one of the buildings inside Sri Harmandar Sahib (Golden Temple) complex, which is the holiest Sikh shrine.The Indian army hoisted this flagy during its attack on the shrine in June 1984.The majority of the nationalists hailed this acts at that time.