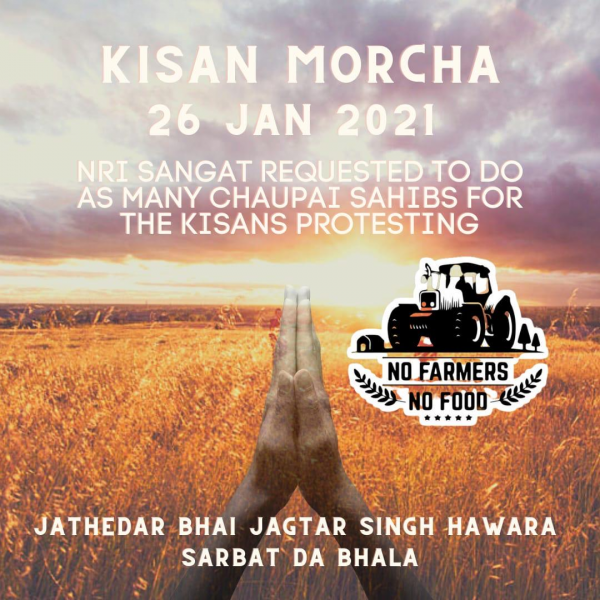 1. Sri Akal Thakht Jathedar Jagtar Singh Hawara requests all Sangat to do Chaupai Sahibs Paath for all the farmers that are protesting.
2. Sikh naujawans came on stage today. Noted Sikh scholar Bhai Mandheer Singh of Panthik Sewak Jatha Doaba spoke on stage stating it should be done according to Panthik traditions. They asked Sangat for approval. They have selected in Sangat 5 personalities to liaise with farmer leaders on the way forward. The 5 selected are Lakha Sidhana, Dr Sukhpreet Singh Udoke, Bir Singh, Deep Sidhu and Raja Ram Singh. They want more transparency from farmer leaders to the Sangat. Bhai Mandheer Singh and Bhai Ajaypal Singh Brar and the 5 chosen today will liaise with farmer leaders.
3. Lakha Sidhana speaks out against Punjabi YouTube media channels that have popped up during morcha. Some are intentionally causing issues by spinning news so morcha personalities break their ekta. They twist a story, then put a microphone in front of another morcha asking for their reaction. The aim is to create unnecessary drama to create views for their YouTube videos.
4. Sangat passed that people are welcome to have Indian Tiranga or farmers flags. But Khalsa Flags will fly and Punjab is proud of its Khalsa Nishaans.
5. A suspicious person was caught with a gun next to the Tikri border stage with a gun. The security volunteers nabbed him. He was handed over to police. The miscreant belongs to Jhajjar area of Haryana. Police is investigating the miscreant & trying to uncover his links.
6. Farmers leaders are not happy with the protest route given by Delhi Police. Farmers want to go on ring road and then to the Red Fort ( Lal Kila). Jasveer Singh from KTV tweeted, “it’s 11:30 at night more than 10000 farmers are demonstrating their dissatisfaction with tractor rally route.” Many youth said they will go on Ring Road.
7. Delhi Police get reinforcements from numerous states Police forces to bolster numbers for tomorrow.
8. High Level meeting took place between Amit Shah, Narendra Tomar, Agriculture secretary, and Police officials. This meeting lasted for 2hrs from 8-10pm.
9. Delhi police will use drones to monitor the match.
10. An estimated 500,000 tractors will take part in the rally tomorrow. All roads leading to Delhi are jam packed today.
11. UP police has tried to limit and restrict the movement of tractors by denying fuel to tractors. Then UP farmers had to breakthrough police barriers to attend March tomorrow.
12. BJP put out a story about Pakistan and 300 Twitter handles about farmers. It’s an intentional distraction so that Indian news channel cover this story on the airwaves rather than the build up of farmers from all states.
13. Godhi media use any excuse to link farmers issue with Pakistan and sikhs calling for the rightful call for Khalistan. While farmers have shown their nationalism over 60 years, it’s clear the BJP govts are arrogant and will never accept them as equal citizens.
14. Disgraced MP Ravneet Bittu from Congress after being slapped up yesterday, today said khalistanis are paying 1 crore to Sikhs raising Khalistan flag. This is a common modus operandi. Indian govt do something stupid, Godhi media spin the story to blame the minorities. Then puppet MPs like Ravneet Bittu make outlandish claims so the media conversation is never about Ambani and Adani links to BJP or them taking the livelihood of 25 million farmers. Instead the media just parrot talk of Pakistan and anti nationalism of oppressed minorities. The media will make you think the oppressed are the oppressor, while they are funded by the oppressor. His visit to the farmer morcha was preplanned so he can part of the news cycle to distract from the massive build up of farmers.
15. Thousands of modified tractors arrive as many expect the Police are dishonest and will cause issues during the protest.
16. Posters on internet calling for Large Kisaan Rally outside Indian embassy in London on Indian Republic Day tomorrow between midday and 2pm. Convoys arriving from various parts of UK.
17. San Francisco Kisan car Rally to reach Indian consulate at 11am tomorrow.
18. Sikh Relief are feeding the farmers a diet of Chardi Kalá, through nutritious fresh fruit juice, fresh coffee, Langar, positive thought and Gurbani. Currently providing 30,000 cups of coffee a day.
19. 70 year old Gurbachan Singh is ready to travel to march to Delhi.
20. Economist Dervinder Sharma tweets, “While more than 60% of kinnow crop is still to be harvested in Punjab, prices have crashed. Against the farmgate price of Rs 17 per kg last year what farmers are getting this year is not even Rs 8 per kg, reports @htTweets”.
21. The Guardian newspaper from London writes a scathing editorial about Modi’s Govt and the new farm laws.
22. Godhi media Arnab Goswami forced to declare his income for last 17 years, as his corruption becomes a national conversation.
23. Documents emerge that show Capt Amrinder singh and many other state CMs were part of a committee that created these farm laws.
24. Protests in Mumbai get larger as more farmers from that region gain confidence to protest openly.
25. Everythings 13 has created a leaflet for diaspora worldwide to print or share digitally ahead of the Kisaan protests tomorrow. They are mother body of Sikh Press Association and Basics of Sikhi.
26. Video appears of a Singh standing on a motorbike while doing gatka with 2 kirpans on his way to Delhi.
27. Student rights activist Kanchan Nanaware who agitated for farmers, workers, & Dalit rights was accused of running a “frontal organisation” for Naxalites has died in prison spending 6 years awaiting trial under UAPA.
28. Brampton Centre MP Ramesh Sangha has been kicked out of the Liberal Caucus by PM Trudeau because he made “baseless and dangerous accusations against a number of his caucus colleagues.” He had made baseless allegations against Navdeep Bains as part of an Indian govt strategy to target active Sikhs in Canada.
29. Huge expectations and excitement on the morcha site. Some said they will not sleep tonight as they see thousands more Sangat arrive.
30. Vaheguru Mehar Karan, we want all farmers being able to send their message to BJP & Modi, but all be safe.