CHANDIGARH, Punjab—During the past few days, BJP leaders have geared up their anti-farmer activities under the garb of “raising awareness about positive sides of farm laws” in Punjab. These activities of BJP leaders have incited farmers to take action against them due to which several incidents of clash have come to fore.

On January 10, BJP leaders faced opposition by farmers in Jalandhar when they tried to campaign in favour of farm laws under the security of shield of police.

On January 15, a similar incident came to fore in Bhawanigarh where farmers surrounded BJP leaders for about three hours when they were trying to campaign in support of farm laws.

Such incidents are likely to get increased in the coming days due to the tractor rally announced by agitating farmers in Delhi.

The ruling BJP is not leaving any stone unturned to crush farmers’ agitation and the ongoing provoking activities of BJP leaders in Punjab are definitely encouraged by its core leadership, which is keen to create ground for imposing president rule in Punjab. 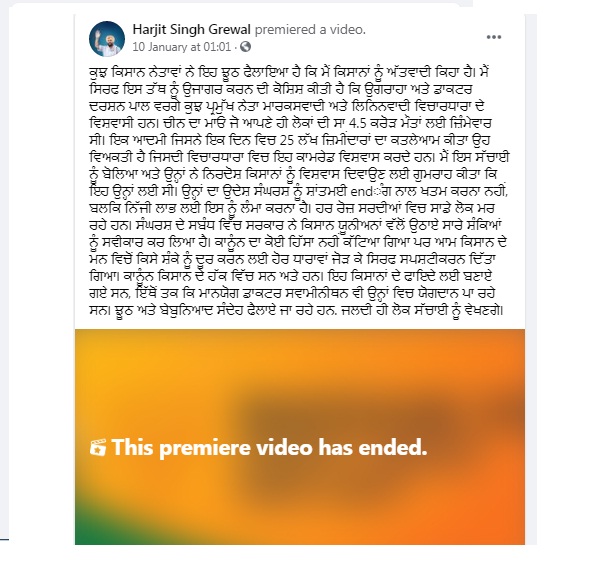 After unsuccessful attempt of using Khalistani narrative for the agitating farmers, Punjab based BJP leaders like Harjit Grewal have now straight-forwardly started launching personal attacks on farmer leaders like Joginder Singh Ugrahan and Darshan Pal while dubbing them as Comrades, Maoists etc.

Last week, another BJP leader Surjit Jyani had also drawn flak after he accused agitating farmer leaders of being stubborn. He had also accused that the farmer leaders don’t want solution and they were having a hidden agenda.

The BJP has an established record of prospering its pro-Hindutva agenda by inciting communal disharmony in society.

In 1980’s, the law and order situation in Punjab was worsened by the BJP leaders like Harbans Lal Khanna through intolerable hate remarks against Sikhs.

Former Amritsar SSP Gurbachan Jagat, who remained deployed in Amritsar during the 1980s, holds BJP responsible for worsening the law and order situation in Punjab during 1980s.

No doubt, BJP won’t refrain repeating its tactic this time too. So, if not prevented by time, BJP leaders will definitely cause a serious law and order problem in Punjab like they did in the early 1980s.