1. Punjabi tribune reported 4 more deaths of protesting farmers
2. Jagtar Singh (62) of Muktsar Sahib has passed away earlier today. Jagtar Singh was at Tikri from last 28days. He suffered due to heart attack after returning home at village Barkandi.
3. Another farmer Sucha Singh (67) S/o- Mahinder singh, committed suicide at toll plaza Ladhpavla on Pathankot Amritsar Highway. He had donated 10k today and consumed poison at around 5pm. He started vomitting after which he was taken to Kotli hospital where he was declared dead.
4. Akhand path sahib in memory of those who passed at Farmer protest was started today.
5. Another Amrit Sanchaar tomorrow at Singhu morcha.
6. Local activists state 100,000 tractors have now reached the morcha sites. Many more turning up everyday.
7. Lohri being celebrated at the morcha by youth doing fires and Bhangra. Bibian singing songs against Modi. Copies of new farm laws are being burned in the Lohri fires.
8. Separately many Sikhs singing keertan and doing Paat.
9. Yogendra Yadav – On the occasion of Lohri, copies of the law were burnt at more than 20,000 places across the country today, intensifying the campaign against the government’s obstinate attitude on the demand of farmers to repeal the three farming laws and the Electricity Bill 2020.
10. 2 bibian who were not feeling well have been sent home from tikri Border today.
11. Yesterday Supreme Court 4 member newly formed committee openly mocked online due to them all already made public statements in favour of these laws. Picture of fraudsters Nirav Modi and Ajay Malviya as part of banking committee, then Amitabh Bachan, Sajjan Kumar and Jagdish Tytler as part of Delhi 1984 investigation committee as they are the accused.
12. Punjabi singer and lyricist Shree Brar gets bail. He was arrested and tortured by Patiala Police, last week. He wrote the Kisan anthem.
13. Punjab Police special cell has kept an eye on many other singers and songs composed during the farmers movement. Many on radar of police.
14. Punjab BJP MP Harjeet Grewal’s car tyres were deflated when his car was seen outside a restaurant. Grewal had to escape the scene in police vehicle. He has been gheraoed for 3rd time in two days.
15. Punjab BJP MP Tikshin Sood has approached High Court for demand of security and also challenged the withdrawal of FIR’s in cow dung dumping case outside his house.
16. Whilst their men are protesting for their rights, the women are tending to the fields with babies placed at the side. The picture is so powerful yet so heart breaking.
17. The borders Ghazipur (partial), Singhu and Tikri (complete), Palwal (partial) remain closed
18. Artist Banksy style large murals of walls of building can be seen from trains. The murals are of farmers in a cosmic style.
19. Babbu Mann is addressing farmers at Singhu border.
20. The Farmer’s Plight Conference being organised on 24th Jan in a collaboration between Imperial College London’s Sikh Society (ICSS) and the British Organisation of Sikh Students (BOSS).
21. Jakara Movement in California begin a series of events designed to help elevate frontline FarmersProtest female voices to wider audiences.
22. The newly constructed semi permanent shelter home at Tikri Border by Khalsa Aid is fully functional with separate spaces for men and women.
23. Bollywood star Hema Malini puts out video in favour of the farm laws. Her explanation has been ripped apart online as it’s clear she is completely ignorant on the effects of the laws.
24. The Tribune – Rural Punjab has gone into an overdrive ahead of the proposed farmers’ tractor march in Delhi on Republic Day with tractors being fitted with hydraulic tools to remove barricades, fire-resistant hardshell trailers being readied to fight tear gas shells and horsepower of the machines being doubled to ferry maximum protesters. While the unions assert the march will be peaceful, Ranbir Singh Randhawa, president, Punjab Students’ Union, which is part of the farmers’ movement, says: “We have learnt from our experience during the November 26 march to Delhi.”With a limited support from organisations, volunteers are spending money from their own pockets to make these modifications. 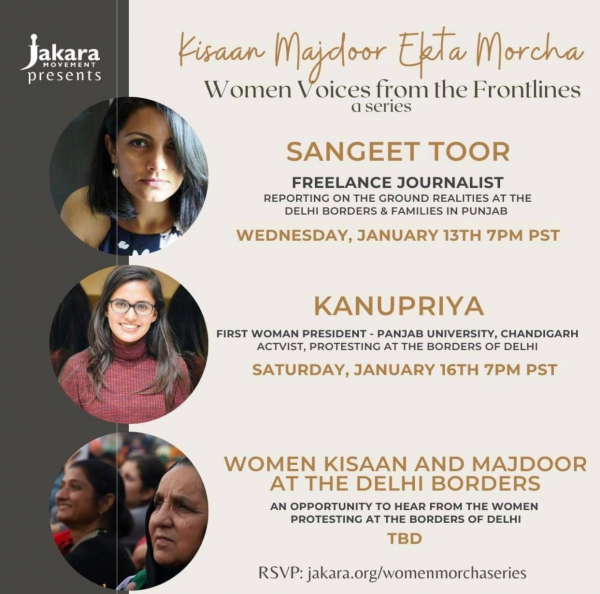