After killing Baba Manochahal in an encounter on February 28, 1993, by the Indian security forces, Punjab Police illegally seized this house that spread over three kanals on a critical location in the village and converted it into a Police Chowki (post). Despite many requests, the Police had not handed over the house to the survivors of Baba Manochahal.

His family had to fight a lengthy legal battle in the courts to get back their property and place of residency. Finally, the Police vacated this property, and the village panchayat handed it over to the family. This house is old-constructed, where Baba Manochahal raised his children before his killing. However, the Police had made his family homeless by seizing the house. 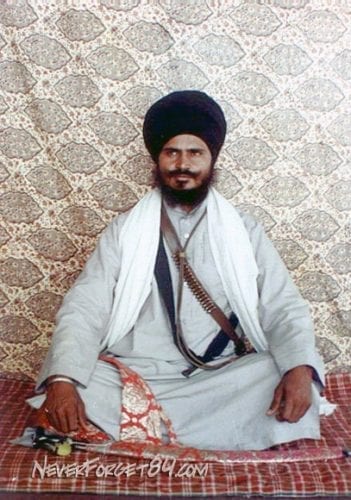 When the family returned to village Manochahal, the police kept harassing them every day and taking them for interrogation. The police even arrested Baba’s eight-year-old son. His 70-year-old father, Atma Singh, was arrested many times and was martyred in police custody. His body was never returned. His younger brother, Nirvair Singh, was abducted by the police in August 1992 and, after a month of unspeakable torture, was killed on September 9, 1992, in a fake encounter.

After getting back possession of the house, the family has not issued any statement yet.

Baba Manochahal, who also remained a member of the Panthik Committee appointed by 1986 Sarbat Khalsa, was the last prominent Sikh Resistance leader to fall. The Indian Government had put a RS 25 lakh reward on his head and searched the entire Tarn Taran area for him, conducting 45 raids at one time to trap him. He escaped each time and continued to be a painful thorn in India’s side. When all the other Singh’s had been martyred, and the entire Indian Security Force was on his trail, he refused the order to go and hide in Pakistan and spit on the offer to surrender. Police could not catch him despite various efforts. Even in the end, he was martyred not by the police bullets but by the betrayal of those he considered his own.

According to the inquiry report of the “Facts Exploring Committee,” established by the Khalra Mission Committee (KMC), the police forces had flaunted all human values and rights for his arrest of Baba Manochahal.