1. Another unfortunate incident happened today. Poison was swallowed by a young farmer Amrinder Singh on the Singhu border a while ago but now it is known that the farmer has died and his body has been sent to the village Machrai Kala of Fatehgarh Sahib.
2. Hundreds of artists come to the Singhu morcha and hold an event called Artists for farmers.
3. A musical program featuring various artists like Kanwar Grewal, Jazzy B, Jas Bajwa etc will be held at Tikri Border today at 1 pm. Hundreds enjoy the program and join in with the singing.
4. Akhand keertan continues from the beginning of morcha. Many farmers are regular on Gurbani recitation. Despite atrocious weather, their souls are enjoying Gurbani sustenance. Thousands of farmers doing ishnaan at 2-3 am and are regular in Amrit Vela.
5. Notable activist Arundhati Roy participated in protests against new farm laws. She spoke on stage and spent the day mixing with activists.
6. Former Supreme Court Judge and Chairman of Press Council of India, Markanday Katju warns “As much as one may wish that does not happen, a repeat of the Jallianwala Bagh massacre or Bloody Sunday (as in St Petersburg in January 1905) or Vendemiarie (as in Paris in October 1795) seems inevitable,”.
7. Protests held by farmers against Sukhbir Badal in Sultanpur Lodhi today. Sukhbir Badal faced the wrath of farmers earlier at Patiala where his cavalcade was gheraoed by farmers. However, in Punjab, he continues to tell innocent people he is leading the Delhi morcha for them.
8. Bhagwant Mann has hit out at Captain Amarinder Singh saying that Captain is pressurizing farmer leaders using Police.
9. 100,000 bikers rally being arranged to support farmers on Jan 26th.
10. Kirti Kisan Union has started recruiting volunteers for 26th January’s Kisan parade. Volunteers will help in organizing the parade, maintaining peace, and ensuring discipline. More than 3500 volunteers registered on day one of recruitment.
11. Recruitment drive begun in 2 districts. Kirti Kisan union will extend the drive to 13 districts of Punjab.
12. MGNREGA employee from Punjab’s Jalalabad Amritpal Singh has been fired for protesting against new farm laws. Farmers are protesting outside the Fazilka DC office against the administration’s decision.
13. Advocates from different parts of Punjab and Haryana arrived at Singhu in support of farmers.
14. More Sikh activists are moving over from Whatsapp to Signal in Punjab and abroad. Some in Punjab complaining that the Jio network is stopping verification code for the Signal app.
15. As Twitter deleted the account of US President Donald Trump on January 9 citing ‘risk of further incitement of violence’, BJP MP Tejasvi Surya and BJP leader Amit Malviya called it a threat to democracy. Amit Malviya is head of BJP IT cell.
16. Sikhs protests in Time Square, New York.
17. Van with huge billboard supporting farmers drives around London.
18. NSYF holding a webinar with journalist Sandeep Singh tomorrow at 10 am UK time.
19. Arnab Goswami still hiding from challenge by Sikh Press Association for an open debate on a platform other than Republic TV. 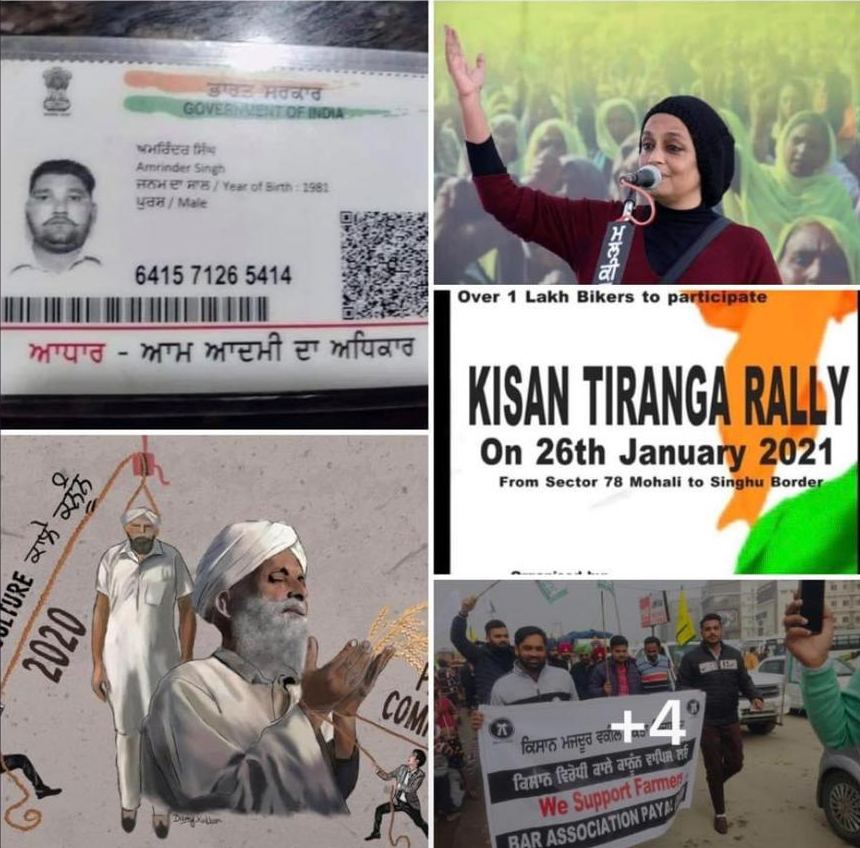