1. Lakhwinder singh Of village Bras (Patiala) who was participating in Farmers agitation at Singhu with his uncle passed away after returning home. Lakhwinder Singh left his aged parents, wife with three daughters this evening. He had returned home due to illness after rain.
2. Bhai Darshan Singh of Bhinder Kalan has committed suicide due to his inability to pay the debt of 5lacs. He was pressurized by the banks.
3. Agriculture minister Tomar and Piyush Goyal meet Amit Shah before the meeting with farmers. However, Amit Shah has never met the farmers leaders directly.
4. Talks between Farmers’ unions and BJP ministers collapse. Some reports say the agriculture minister turned up 45 minutes late to the talks to show disrespect to the farmers. Last time the ministers were 30 mins late.
5. Agriculture minister said there is no chance of withdrawing the 3 laws which show how ingrained the BJP Modi govt is with Ambani and Adani.
6. Farmers said they will here and die here if required until the matter is resolved with laws withdrawn.
7. Farmers Unions will hold a meeting tomorrow to decide the further course.
8. Next round of talks to be on the 15th of January.
9. BJP govt hoping the longer the morcha goes on, it may manage to divide and rule the farmers, or the farmers will give up.
10. Farmer leader Rajewal criticized Sukhbir Badal as he is going round in Punjab stating Akali Dal is leading the morcha. Rajewal said the Sukhbir Badal is mentally unbalanced. Badal’s family is so weak, they could never achieve a morcha like this.
11. 2000 farm workers under the leadership of Punjab Farm Labor Union reach Tikri border. Many of them are females.
12. Female farm labour leader Gurmel Kaur Singhwala and female farmer leader Paramjit Kaur Pitho both spoke today. They encouraged female farmer laborers to strengthen the struggle and sit and the morcha.
13. Tanmanjit Singh Dhesi with 100+ MPs and Lords sign a cross-party letter to the Prime Minister, given huge concerns for the peaceful India FarmersProtest. The letter asks Boris Johnson to raise with Indian PM Modi the Farmer protests, when they liaise, expressing hopes of a speedy resolution to the current deadlock.
14. A group of Sikh soldiers take leave from the Indian border and join the protest in Delhi.
15. Tens of thousands of Tractors seen in large numbers in support of the farmers’ movement in Jalandhar villages.
16. Khalsa Aid India is setting up a semi-permanent shelter home at Tikri Border for our farmer community. Around 800 people would be able to sleep peacefully at this shelter.
17. Sikh Press Association Press Officer Jasveer Singh took part in a so-called “debate” on India’s @republic TV with notorious nationalist mouthpiece Arnab Goswami. On the show, Jasveer Singh challenged Goswami to debate outside of his controlled environment. Will he accept the challenge?
18. In support of the Stop Funding the Hate campaign, CIBC confirms that they have no planned advertising with Zee Network.
19. Sikh Motorcycle Club members across Canada stand in solidarity with our farmer sisters and brothers in their fight against the oppressive laws in India. Come join us every working day in front of Indian Consulates in Vancouver and Toronto from 11 AM to 2 PM.
20. Sikhs of the New York area will lead a demonstration from Astoria Park to the India Consulate to barricade the building in support of the ongoing.
21. Abhay Singh Chautala has said that he will resign if demands of agitating farmers are not met till 26th Jan.
22. Vinson Palathingal, an Indian American who waved the Indian flag along with pro-Trump mob at Washington CapitolSiege, seen with BJP MP Poonam Mahajan at dinner organized by USINPAC.
23. Below is a picture of Lakhwinder Singh who just passed away. 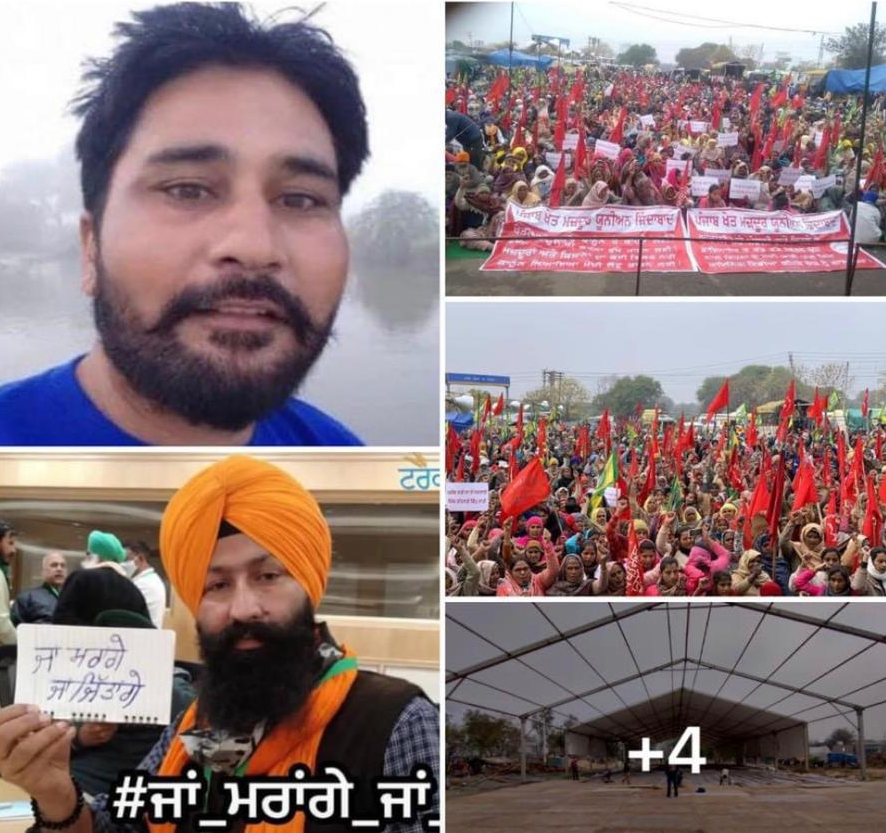