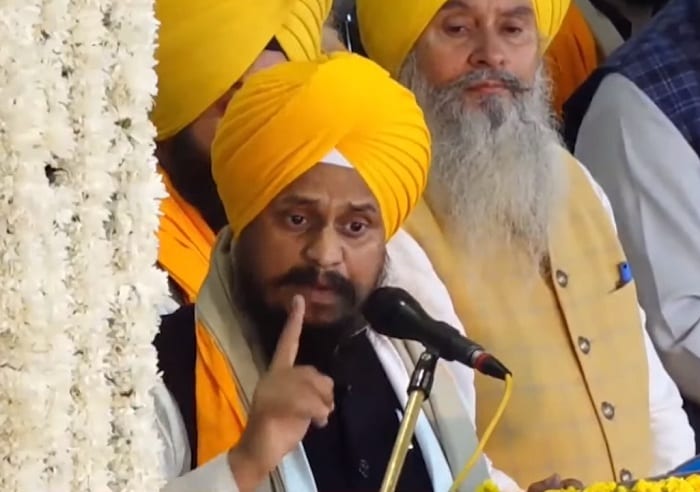 AMRITSAR SAHIB, Punjab—Amid media reports that the Central government of India is planning to approach him to seek his mediation to break the prolonged impasses over three contentious farm laws enacted by the government, Giani Harpreet Singh, SGPC-appointed acting Jathedar of Akal Takht Sahib, today refused to act as mediator citing that this was not a religious issue and his mediation made no sense at all.

Reacting to media reports, he said, “This is the issue concerning farmers of India and about the law. The farmers are opposing three laws enacted by the Indian Government. This is not an issue that pertains to Sikh Rehat Maryada or religious ethos. Nor is it a matter of any ideological difference. So, only farmer leaders and the Central Government should resolve this issue through mutual talks and meetings. And the government should resolve it as early as possible because the farmers are sitting on the roads for a long time”.

“Yes, Sri Akal Takht Sahib has been making appeals to the community to cooperate with farmers and their organizations in their struggle against these laws. We pray to Waheguru to bless the government with positive thinking so that it gets ready to address the concerns of the farmers,” he said.

Giani Harpreet Singh added, “I appeal to the agitating farmers to maintain peace, patience, and harmony. The entire world is watching the farmers agitating at Delhi borders. So, we should do such things that leave a positive impact on the struggle, which is happening. We should avoid indulging in negative things.”

An exclusive story published on the front page of English Daily ‘The Tribune’ quoted BJP national spokesperson Kamaljit Soi as saying, “As negotiations aren’t moving beyond ‘yes’ and ‘no,’ we need a third party whom both sides look up to. There has been a trust deficit, and spiritual leaders can help bridge the gap. We will approach Giani Harpreet Singh — head of the highest temporal seat of Sikhs.”

Soi claimed it was tough to come to conclusion on any point with around 40 union leaders, attending talks from the farmers’ side. “It’s terribly cold, and even Baba Lakha Singh was of the view that all farmers, particularly women and children, should return home,” he added.