1. Periphery of India’s national capital New Delhi was flooded with tractors as the farmers today took out a tremendous march on their tractors in a rehearsal of their “tractor parade” scheduled on January 26 (Republic Day of India) in protest against three contentious farm laws introduced by BJP-led Central Government of India.
2. Today rehearsal Tractor rally was the biggest one in history. Over 50,000 tractors participated today.
3. More than 1000 tractors driven by bibian.
4. Tractor rally was held ahead on 8th round of talks with BJP minister Tomar tomorrow.
5. Punjab on Tuesday became the first State in the country to formally reject theCentral government’s three agriculture sector legislations, with its Legislative Assembly on Tuesday unanimously passing three Bills to negate the Union laws. The Assembly passed a resolution rejecting the Central legislations and the proposed Electricity Amendment Bill and demanding their immediate annulment. It also sought an ordinance to protect the Minimum Support Price (MSP) and ensure the continuance of procurement by the Centre. The three State Bills provide for imprisonment of not less than three years and fines for sale-purchase of wheat or paddy under a farming agreement below the MSP, besides prevention of hoarding and black-marketing of agricultural produce, among other things. (Source : The Hindu newspaper)
6. A temporary hospital at the Singhu border is in the works. This temporary hospital will have a capacity of four beds and two doctors will be appointed for serving protesting farmers round the clock.
7. BJP Punjab leaders Surjit Kumar Jayani and Harjeet Grewal in a meeting with Union Home Minister Amit Shah. They want action against farmers from Punjab.
8. Punjabi front line Army personnel who posted video against Arnab Goswami fake reporting and lies. Within one day of posting a simple response video, he was arrested on the front line.
9. Farmers trying to march out of Burari grounds have been stopped by Delhi Police. Tussle between farmers and police happened. Around 1500-2000 farmers are at Burari grounds since 26Nov when Farmers leaders declined to sit in at that location.
10. English version of Kisan Veechar released – To the Heirs of Punjab! “We are living through a period of time in which history is being made. This is the history that future generations will narrate and read for inspiration in their future struggles”
11. Godhi media reporters were peacefully ejected from farmers protests as people have a lot of anger against their lies.
12. Deep Sidhu wrote a letter to leaders of United farmers front. He wrote that it’s a responsibility of Leading organizations to listen to everyone. (Picture of letter below)
13. Agriculture minister Tomar met Baba Lakha singh Nanaksar & has reportedly sent a proposal to Farmers Unions via him. The proposal telling unions that states can choose to opt out of implementing farm bills is reportedly sent. Farmers see it as an attempt to divide. Baba Lakha has no farming links and or understands the negotiation, so it’s seen as a mischievous move by BJP. Others calling out his link with Badals.
14. PTC News – However, the farmers’ organisations rejected the Centre’s unofficial proposal sent through Baba Lakha Singh Ji as they said that the proposal was not in written and such a proposal is an indirect attack on the federal structure.
15. Yogendra Yadav on Proposal- “Centre is trying to divert media attention from #TractorMarchDelhi by playing silly games. Our demands are repeal and we are against any efforts to divide states by projecting the problem as problem of one state.”
16. United sikhs has decided to distribute a sum of Rs One Crore to the families of the farmers who passed away at the Morcha or for the purpose of Morcha
17. Piyush Goyal has made an absurd statement saying that he considers talks as an opportunity to teach farmers unions about the benefits of the laws. Joginder Ugrahan called it laughable & face saving politics.
18. Piyush Goyal has be laughed at on Indian media when he said BJP never called Punjab farmers as Khalistanis. The female interviewer proceeded to list all the BJP ministers who said it. Piyush Goyal is leading the negotiations with agriculture minister Tomar.
19. Tribune confirmed that singer Shree Brar was tortured after his arrest for releasing the popular Kissan Anthem. Captain has backed his arrest.
20. In an investigation it has come to light that Brar is not the only one who is in the list of singers/ lyricists to be arrested. Some other renowned singers are under the radar of Amit shah and Captain Amrinder singh.
21. Separately Panth da Mahan Shaheed Bhai Sukhdev Singh Sukhas respected father Bhai Mengha Singh completed his worldly journey today\ 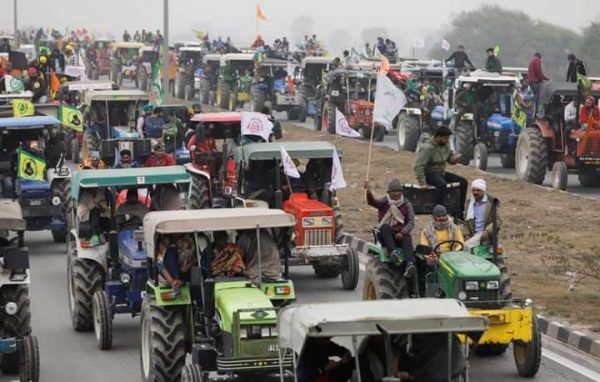