1. Reports show 5 farmers passed away today.
2. Najar Singh, s/o Munshi Singh had returned from Singhu Border & has passed away. He was associated with BKU Sidhupur & had returned home due to illness amid rains. Cause of death was Pneumonia.
3. Manpreet Singh (24), resident of Mandi Kala (Bathinda) passed away. He was the only son of his parents & was sitting in at Singhu border for 10-12 days. His trolley is still at the Singhu border. He was returning home to take new stock of clothes. his picture is below.
4. Punjabi Tribune reports 3 more deaths.
5. Gurdarshan Singh fell ill, went back to his village and died. Ram Singh and Partap Singh lost their lives too.
6. “So far, 60 farmers have lost their lives during the protest. One farmer is dying every 16 hours. It is the responsibility of the government to answer”: Rakesh Tikait, Spokesperson, Bharatiya Kisan Union.
7. The Youth Akali Dal (YAD) claimed on Wednesday that Punjabi songwriter Shree Brar was arrested and tortured by the Punjab government at the directions of Union Home Minister Amit Shah as punishment for writing the ‘Kisan Anthem’.
8. NDTV – The bank accounts of Reliance Communication, Reliance Telecom, and Reliance Infratel — all owned by Anil Ambani — have been classified as “fraud” the State Bank of India has told the Delhi High Court, opening up possibilities of a probe by the Central Bureau of Investigation.
9. Arnab Goswami continues his embarrassing fake news from the @republic TV in regards to Raman Brar. He claims Canadian Sikh is an MP and interfering with Indian internal matters. Raman is not a “Conservative MP”. Raman is a private citizen. Raman is not a “Canadian Opposition Leader” – that is Erin O’Toole and Jagmeet Singh. But facts have never mattered to Arnab, neither does good journalism.
10. Farmer leader Rajewal- Many attempts are made to derail the movement. RSS agents are trying their best and we have caught many here. Govt should know that there is no rift among union leaders and there never will be.
11. Farmer leader Gurnam Singh Chaduni visited Fatehabad, Haryana and called for boycott of Adani, Ambani and Baba Ramdev.
12. 3rd day of heavy rain. So farmers are making significantly more arrangements for large structures to cover areas in front of stage.
13. Many mattresses soaked and conditions very hard on elderly.
14. Farmers planting onions, herbs and other vegetables around the site.
15. Samagam has been organised to mark the Shaheedi day of Bhai Satwant Singh & Bhai Kehar Singh Ji. A temporary Gurdwara Sahib has been set up at Tikri Border where programs are going on in remembrance of Shaheeds
16. DSGPC helps put up more waterproof shelters and tents at Singhu border.
17. Farmers will begin a tractor march from Ghazipur border to Palwal. The rally will be taken out under the leadership of Rakesh Tikait. Takait reached the Ghazipur border sometime ago.
18. Tractor rallies will be taken from Shahjahanpur border as well. Rally from Tikri Bahadurgarh will be taken as well.
19. FarmersProtest has entered day 106 in Punjab. A huge tractor rally has been taken out in Malot area of Sri Mukatsar Sahib. March will move from Guru Nanak Dev Ji Chowk to NH & back. Rally has people from all neighbouring villages
20. Video of 75 year old sikh farmer who brought a 30 Sangat with them who had to walk the last 8 km to get to the border.
21. Tractor rally from Singhu, Kundli, Piyau Manri, Badh Khalsa will be taken. This will be the largest tractor rally in the history.
22. This protest is already the largest in history. The langar is the largest free kitchen in the world. Now it’s going to have the largest tractor rally in the world. However Modi ignores all of it for his super rich friends who funded his election campaign.
23. Franchise owners of Burger Singh who are Delhi based Sikhs and also have international outlets have set up vegetable burger langar at Tikri Border.
24. Franchise owner of Sardar Baksh coffee outlet has set up imported beans coffee stall for farmers at Tikri.
25. To spread awareness, pamphlets with realities of the three farm laws are distributed at Tikri Border.
26. Bangkok Post article – Women cultivate a new voice in Indian farm protests.
27. The UK labour movement and trade unions issued statement to say it stands in solidarity with the hundreds of thousands of farmers in India and the wider trade union movement in India fighting for a just future.
28. Sikhs still face censorship on social media platforms, but Modi supporters like Kanguna do not. Sikhs have to change hashtags everyday. RSS do not have to do that. So today on Diljit Dosanjh birthday the No1 trending hashtag was #HappyBirthdayKhalistaniKutte. However if Farmer hashtags were not censored they would have been no 1 for last 41 days.
29. @PanYaab tweeted Diljit has encouraged a lot of Indians to learn Punjabi to follow his responses to Kanguna.
30. Below is the picture of 22-year-old Jatinder of Mansa district was victim of an accident during the Delhi march, but the father has now reached the front to bring the presence of his son. His fathers holds his picture. 2nd picture is Manpreet Singh who passed away today. 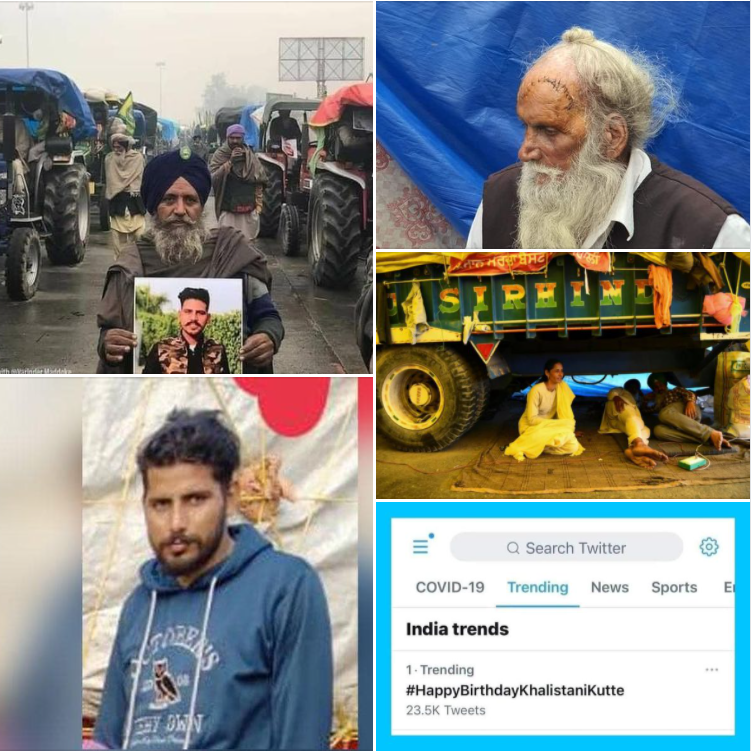