CHANDIGARH, Punjab—On January 3, former Union Minister Harsimrat Kaur Badal faced a sharp protest by the farmers in Mansa district where she had gone to extends condolences to the family members of farmers who have lost lives in the ongoing farmers’ agitation at the Delhi border.

The angered farmers showed black flags to the caravan of Harsimrat Badal and raised slogans asking her to go back.

Harsimrat Badal had gone to extend condolences to the family members of martyred youth Jagseer Singh in village Bhadra. As soon as she started moving towards village Dodra, the local farmers gathered there and started showing black flags to her caravan while raising slogans asking her to go back.

The angered farmers openly announced that Harsimrat Badal has betrayed the farmers so they won’t allow her to enter into any village of Mansa district.

The leaders of Bharati Kisan Union (Ugrahan) said that the Shiromani Akali Dal (Badal) has never come forward to join the farmers’ struggle and now it is just playing politics by extending condolences to the family members of martyred farmers.

After these protests, Harsimrat Badal canceled her scheduled visits to the other villages including Guraddi, Bachhoana, and Dharampura.

Prior to her visit, Harsimrat had tweeted that the BJP Government has failed the farmers in meeting their demands. She said the only hope for farmers was that the Supreme Court of India intervenes in this matter. 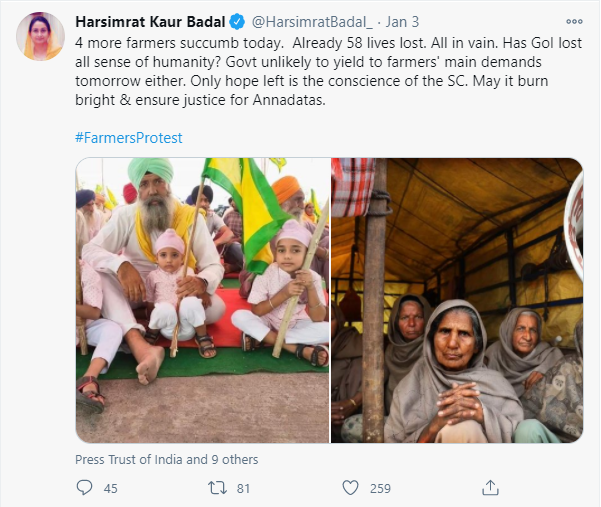 However, in response to Harsimrat’s tweet, she faced strong opposition from social media users asking her to watch her own video in which she defended the anti-farm laws as the Cabinet Minister of Food Processing in the Government of India.