1. Today, 3 protestors passed away. Manpreet Singh kaka who has been at the morcha since day 1 has passed away. Siri Akhand path started for him.
2. Bhupinder Singh from village Rara passed away.
3. A 55-year-old Barnala-based farmer, Sukhdev Singh Gurm, died of a heart attack while sitting on a dharna outside BJP district president Yadwinder Singh’s house. Gurm was protesting outside Yadwinder’s house since October 1.
4. The morcha is the world’s largest peaceful protest. Now as it feeds hundreds of thousands every day, this morcha has also become Worlds largest Free Kitchen (Langar).
5. The revised approx numbers of protestors at all borders as of today. Note numbers just keep increasing in hundreds and thousands. Singhu- around 200,000, : Tikri- around 125,000 : Ghazipur- 20,000 : Shahjahanpur- around 8000.
6. Nobel laureate Amartya Sen, the 87-year-old Harvard University professor, backed the farmers’ protests against three agricultural laws, insisting there was a “strong case” for review of the laws.
7. Ongoing games by BJP govt. Center had told farmer leaders to decide date and time of talks. Farmers had proposed talks at 11 AM on 29th of December. Today on 28th of December, ANI made Center’s letter public saying it wants to talk on 30th of December at 2PM. This timing is deliberate as it’s in the middle of a massive tractor rally on 30th dec planned by farmers.
8. 1340 Jio Towers have been taken down approx 7k left. Panthik Spirit is is growing fast in Punjab. This is causing massive issues for Jio mobile company owned by Ambani.
9. Revelations that many of the Jio Towers were built on Panchayat land, without Panchayats approving them. So construction of them is illegal.
10. Bhai Manpreet Singh Kanpur, Bhai Bir Singh and Bhai Sukhpreet Singh Udoke, do a keertan divan at morcha.
11. Fatehgarh Sahib : Sukhbir Badal, President SAD (B) had to face the wrath of the Punjab youths. Sangat at historical Gurdwara Fatehgarh Sahib this evening, noticed when he had come to pay obeisance to younger Sahibjadas after the conclusion of Jor Mela. He was quickly taken by security as Sikh youth surrounded Akali Dal workers. Sangat cheered as his convoy of cars speed off.
12. Agitating farmers announce to boycott Punjab BJP leader Harjit Grewal.
13. Agriculture minister tweets letters of support from Haryana farmers. Journalist Ritesh Lakhi responds – “Wonder why Union Agriculture minister is seeking ratification for his farm laws from a nondescript kisan club of Haryana ! Still such tactics being adopted by union ministers are not in great spirit, nor intent.
14. Significant protest outside Indian consulate in Toronto today. Despite snow and icy winds, hundreds of vehicle and protestors supports the farmers.
15. Sikhs In Vancouver hoist the Khalsa flag outside the Indian consulate.
16. On the YouTube link to Modi’s Mann ki baat programme, it’s got 32,000 dislikes & 16,000 likes for . That’s actual public reaction & not Godhi media fake news.
17. USA sikh trucker covers his trolley in posters supporting farmers morcha. Huge letters say No Farmers No Food, Shame on Indian Government. At rear is a huge picture of Modi with a necklace of shoes. Sikhs / Punjabis have thousands of trucks in North America. If all could have banners like this, it’s free advertising, educational for North America population, and will send a hugely embarrassing message to Modi and BJP. It may even be more effective than rallies but in combination is excellent. North America truckers, karo Kirpa……
18. Sikh Relief put up a huge coffee machine not far from stage of morcha. It’s gives thousands hot coffee in the morning in the freezing cold. 30,000 cups of coffee per day.
19. Godhi media Zee News ran a fake news against Khalsa Aid. KA responded in a formal statement. Ravi Singh responded in a video while feeding 1500 meals to truckers stranded in Dover. Worldwide response supporting Khalsa aid including Canadian MPs tweeting with #iamWithKhalsaAid.
20. #iamWithKhalsaAid trends No1 in Canada on Twitter. Shame on Zee news as your fake news backfired.
21. UK residents can report the Zee News piece to Ofcom. Ofcom can issues fines, but repeated offenses can lead to removal of broadcasting rights in UK.
22. Yourseva, another Uk based sikh charity put air bikes and other items in morcha gym. Nice video of two elder sikhs enjoying riding on the bikes.
23. Free auto bike service for elderly and bibian at Singhu border.
24. Panth Punjab do more educational seminars on Delhi protests. All can be seen on Panth Punjab YouTube channel. https://youtube.com/channel/UC-umnft3oxNETnR7ZrOy0VA
25. Saving Punjab – ‘Dr Varinder Sharma, Scientist, Development Studies, IDC said that the yield gap per kg and per hectare has come down drastically in Punjab. According to Dr Sharma, more than 10 per cent small and marginal farmers have given up agriculture during the past decade following a decline in profitability, stagnated yields, reduced public investment in agriculture.
26. BJP MP Hans Raj Hans does an interview where he struggles to openly support the farmers instead makes himself out as the victim.
27. A sikh farmer was beaten after he refused to pay Rs200 per quintal as bribe to centre in-charge. Later @uppolice registered FIR against farmer before taking his complaint into consideration. He had sold 287 quintals paddy at a centre in UP’s Shahjahanpur on Nov 26.
28. 23 Sikh boys who didn’t keep kes (Monas) have vowed to keep Kes by taking an oath over fire at Sarai Aurangabad. (Bahadurgarh). The boys from Amritsar will undergo Amrit Sanchar after Morcha gets done with.
29. Aljeezera – India arrests 75 in Kashmir after local elections. The arrests came after an anti-Modi alliance won majority of seats in local elections last week. The Indian government has arrested at least 75 Kashmiri political leaders and activists to forestall political unrest after an alliance of Kashmir’s regional political parties won local elections, leaders and a police official said on Saturday. This is Modi’s democracy.
30. Separately Mata Upkar Kaur Ji, mother of Prof. Devenderpal Singh Bhullar passed away today.
31. Lastly, below is the picture of Manpreet Singh Kaka mentioned in point 1. 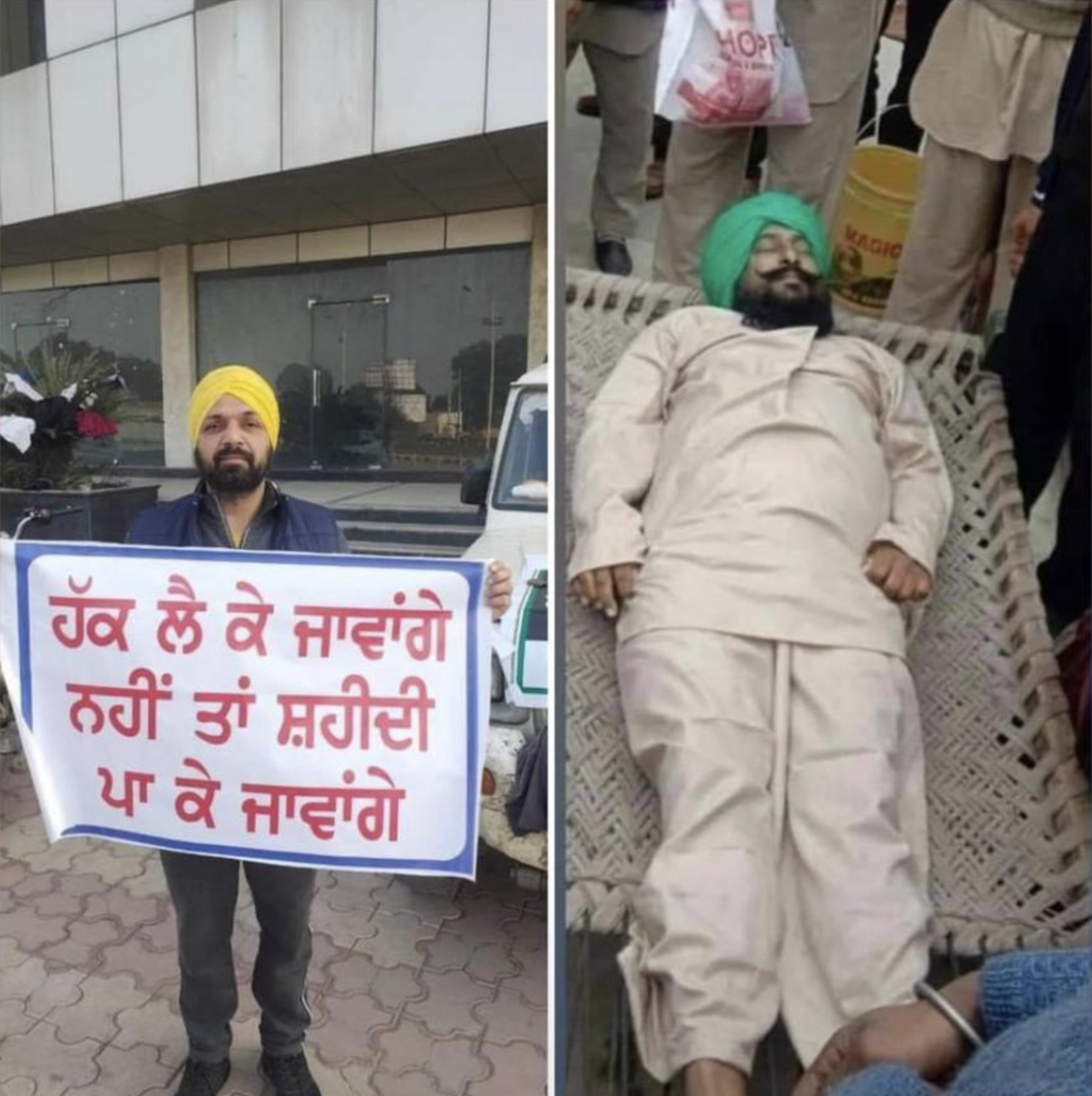